Original article appeared on 10.7.2019 on https://www.mobilemarketer.com/news/modelo-brings-murals-to-life-for-day-of-the-dead-with-ar-experience/564437/

Modelo’s OOH campaign for Day of the Dead shows how the beer brand continues to develop marketing efforts with the latest mobile-based technologies. The combination of a billboard with an AR experience aims to engage smartphone users with original content they can share on social media. Because the AR activation uses web-based technology and doesn’t require a separate app download, it’s more accessible to a wider group of people with different models of smartphones. 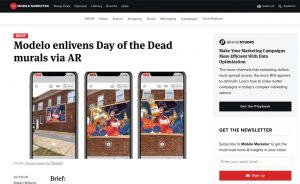 Modelo, which has been experiencing significant sales gains at a time when many mainstream beer brands are seeing sales contract, has experimented with mobile-based technologies for past campaign tie-ins with Day of the Dead, or Dia de los Muertos, the Mexican holiday that celebrates the lives of deceased friends and family. Two years ago, Modelo’s campaign included a Snapchat Lens, which also uses AR technology to decorate photos, and a festival on Facebook Live, Digiday reported. Day of the Dead celebrations have become more mainstream in the U.S. amid growth in the Hispanic demographic to 18% of the total population, USA Today reported.

Modelo is among the brands that have combined mobile technology with OOH advertising, which not only is a powerful channel that urges consumers to visit physical locations, but also can trigger measurable responses through mobile devices. Coca-Cola’s Fanta last month launched a campaign that let Snapchat users point their smartphones at Fanta’s billboards and posters to unlock digital content including shareable AR filters and sticker packs. McDonald’s in August deployed an OOH promotion that included an integration with Snapchat to bring ad posters to life with AR imagery.

Spending on out-of-home (OOH) advertising grew 4.5% in 2018 over the previous year to reach $8 billion, per the Out of Home Advertising Association of America (OAAA). Digital OOH represented 29% of the total 2018 OOH revenue, but there were also increases in the four main formats: billboards, street furniture, transit and place-based.