Modelo Brings the Dia de Los Muertos (Day of the Dead) Celebration to Life with AR Campaign Generates 16.5% Increase in Sales in Markets 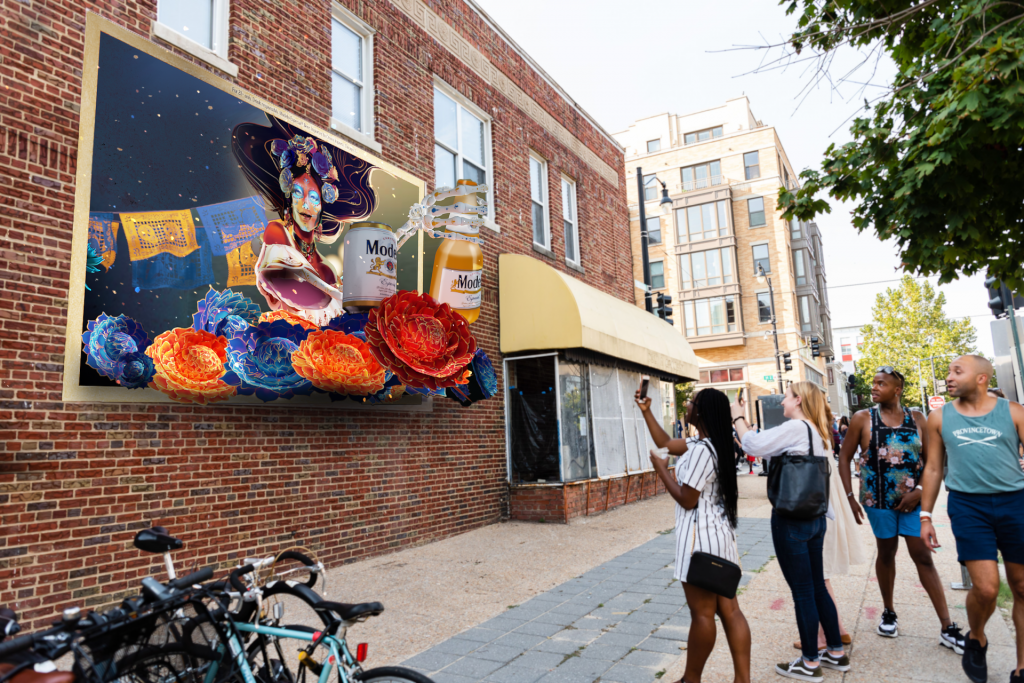 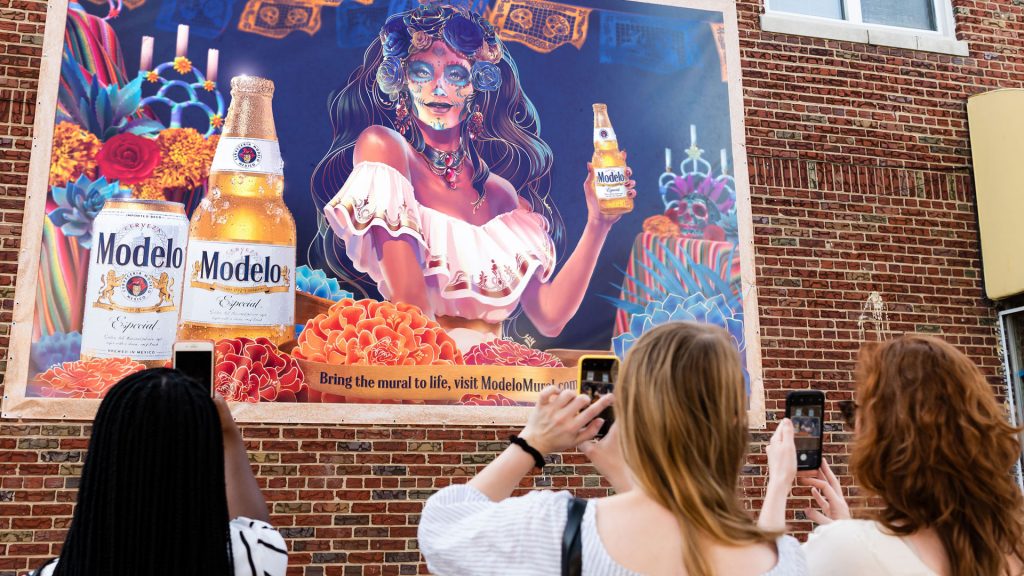 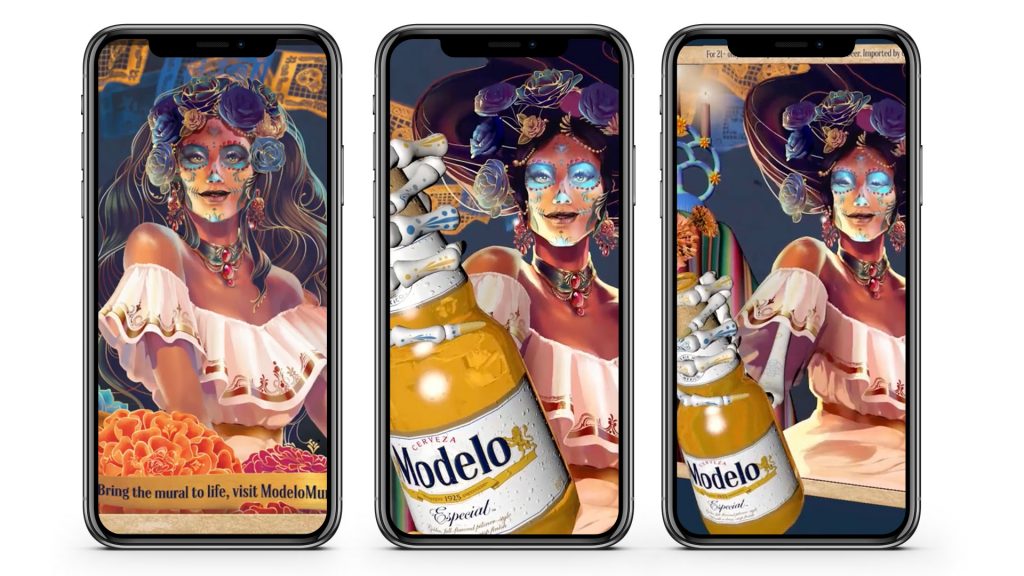 Groove Jones worked with the Constellation Brands Beer Division Southeast team to create a unique OOH and point of sale campaign that brings the Modelo art pieces to life through the power of AR. All you need is your phone to activate the experience. 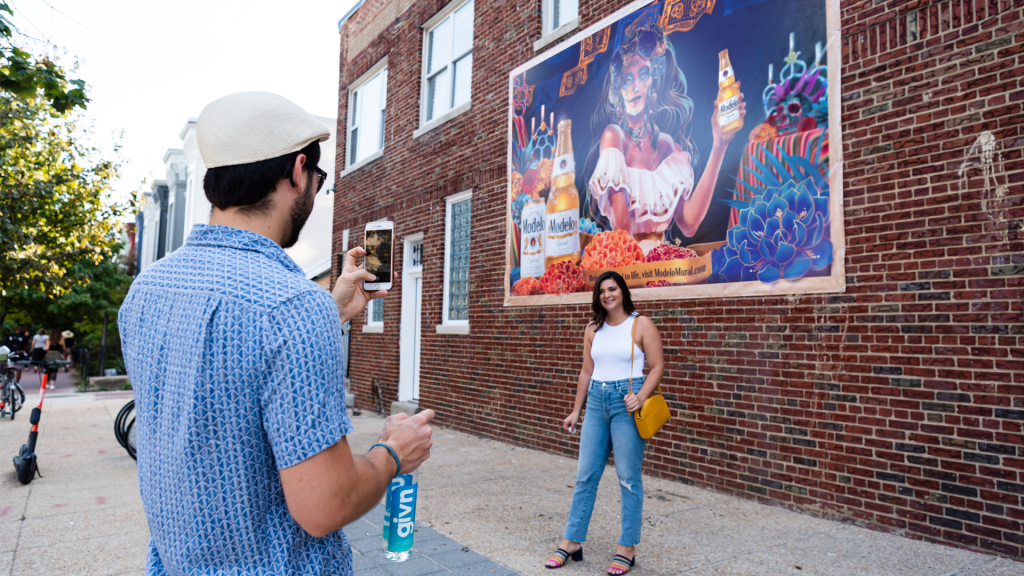 The OOH campaign consisted of an oversized mural that resembled a hand-painted portrait of this scene. The mural is appearing at the following locations.

The campaign ran for 2 months and it secured some great KPIs for the client. 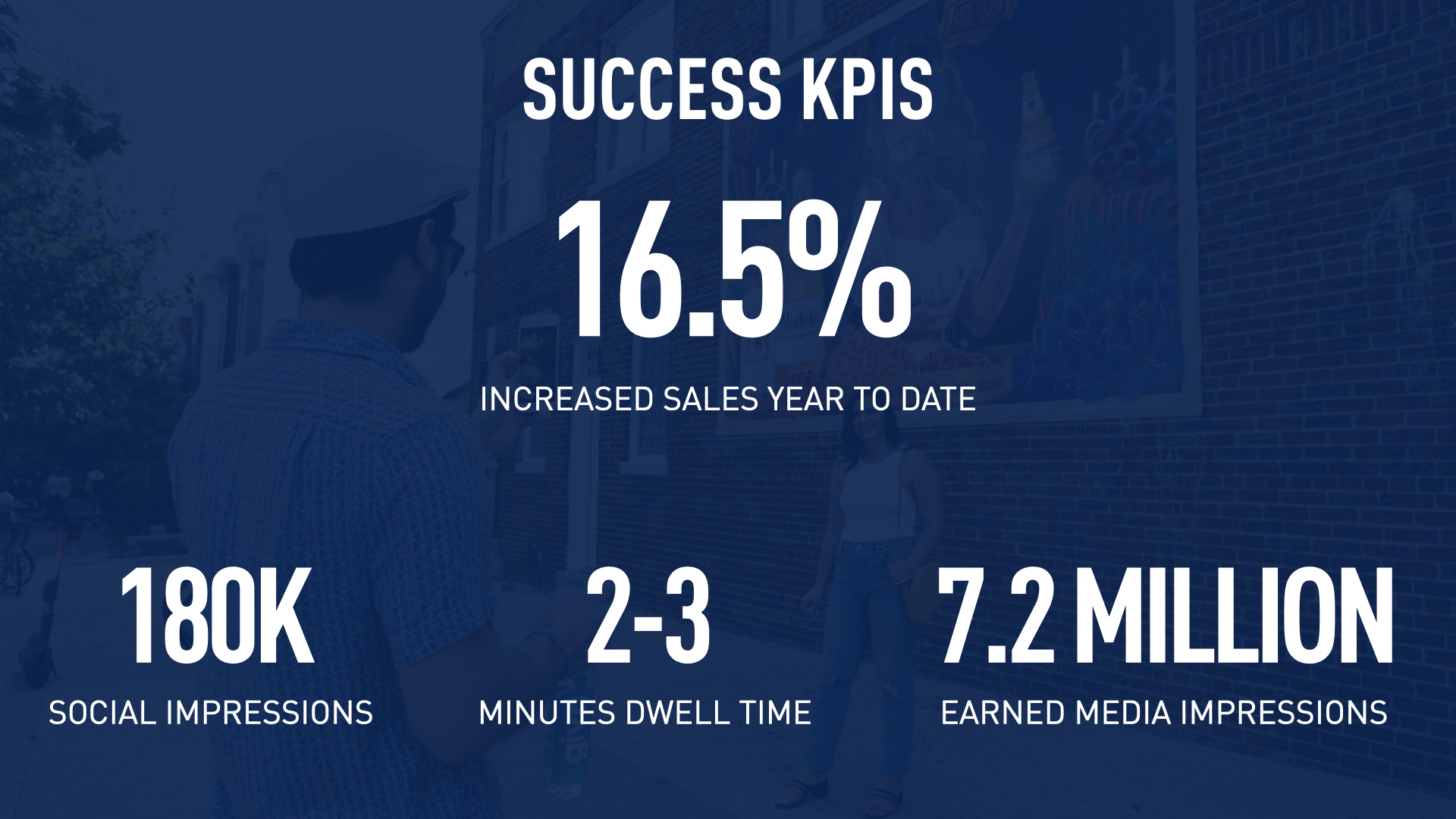 OOH Campaign “Celebrate Life in the Present and Past”

Day of the Dead comes to life in many ways across the globe, but one thing the celebrations all have in common is rejoicing with the food, drink, music, artwork, and activities that lost loved ones enjoyed in life.

The campaign has one call to action – Bring the Mural to Life – visit ModeloMural.com. Participants that visit the site will unlock an eye-catching augmented reality experience by pointing their camera at the mural. Below is what the mural looks like when it is activated. 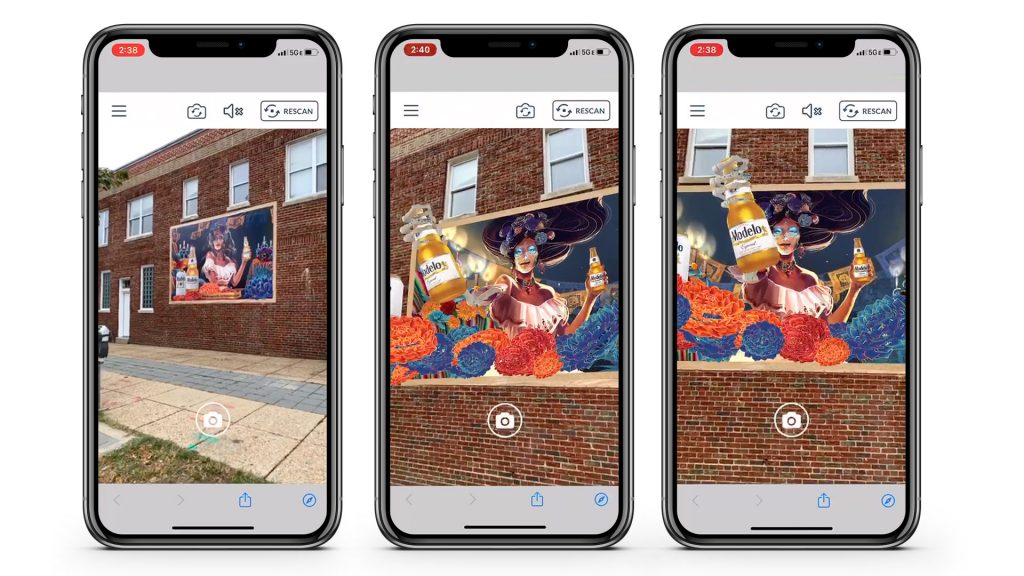 As you can see, the mural transitions from a traditional 2d image into an exciting three-dimensional image all through the lens of the user’s camera.

Check out the behind the scenes video below showcasing the artists that worked on the mural.

The Groove Jones team designed both the printed mural and the digital AR component of the mural. The team presented multiple concepts of the design, which focused on the concept of seeing an amazing transition of a beautiful woman turning into a vision from Dia de Los Muertos.

The team started with traditional pencil sketches and then digitized them into various stages to demonstrate the way the image would animate and change. 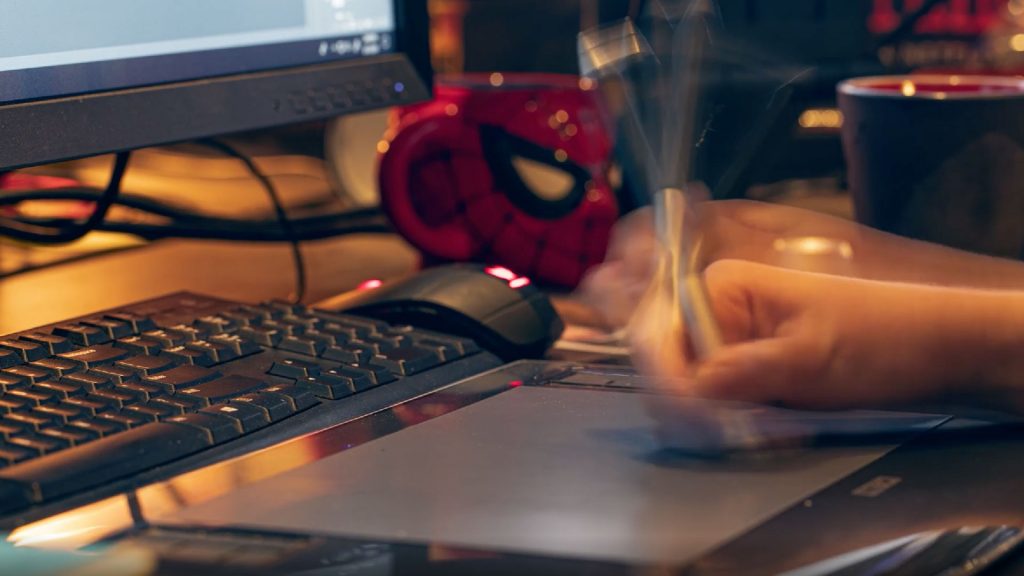 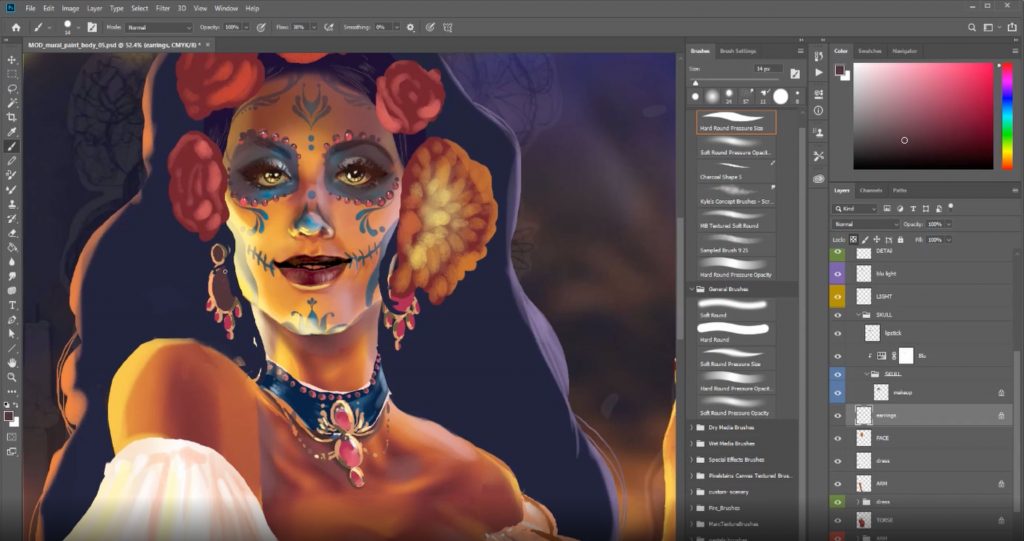 Once the creative concept and visual style was achieved, the team began finalizing the design of the printed mural which would be used across multiple platforms – 10’ x 15’ outdoor wall murals, table tents and posters. 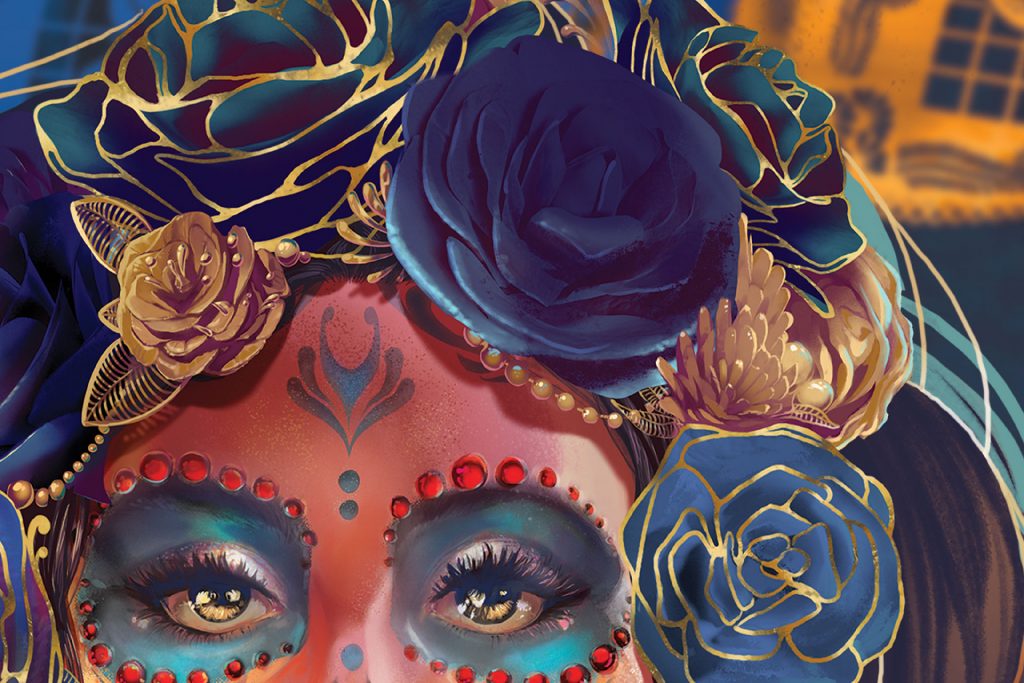 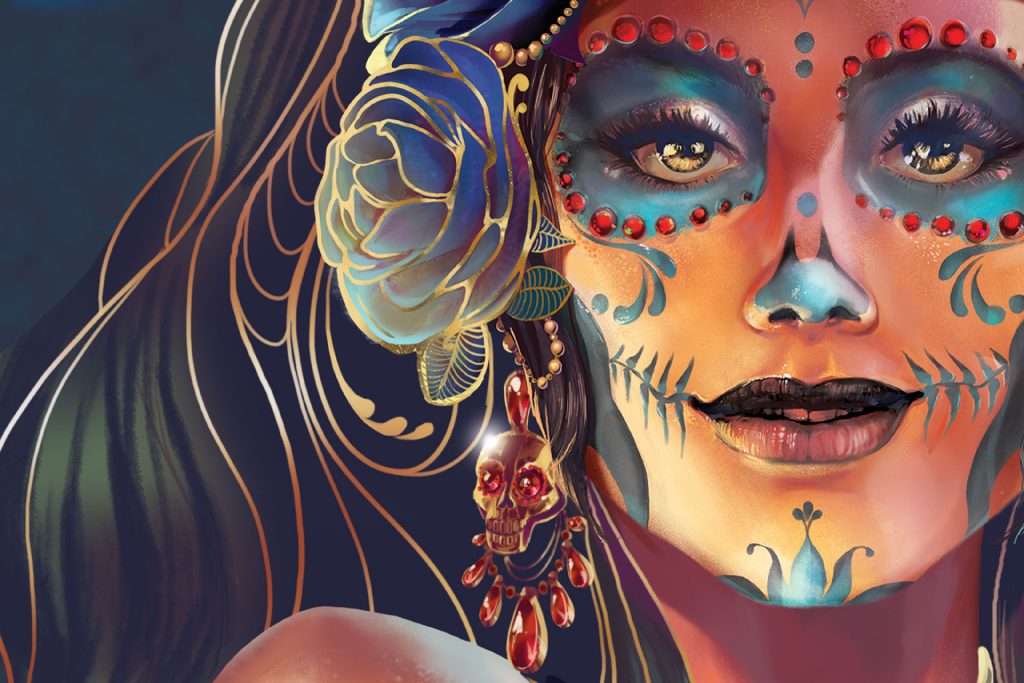 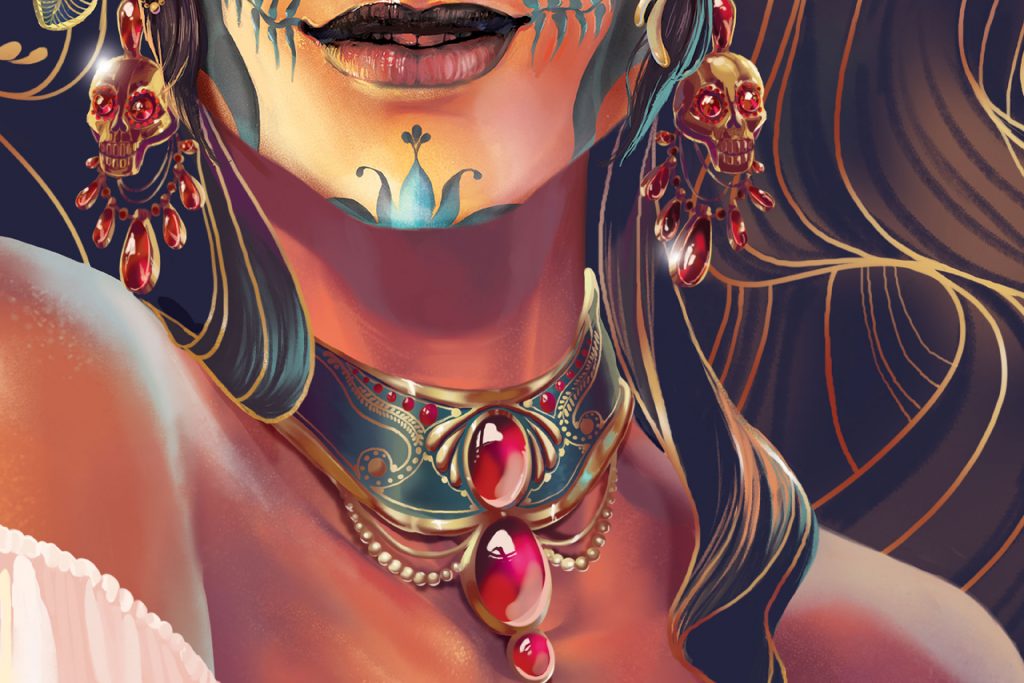 After the traditional artwork design was lacked, the team began to create the 3d assets that would be used to bring the illustration to life. Bringing a 2d image to life in AR often leverages three-dimensional objects and visual effects to achieve a compelling experience. For this experience, we needed to create 3d versions of the Modelo bottles and cans that looked realistic. The water and ice needed to refract light as well as the liquid in the bottle needed to have caustic effects and refract the light so it looked picture perfect. 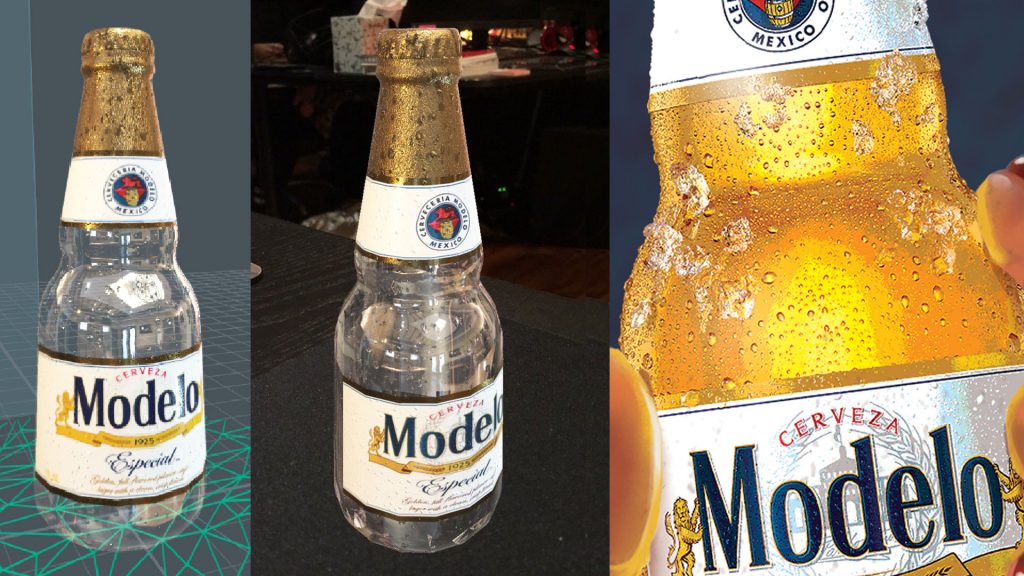 The front row of marigolds spill out as the woman’s arm reaches out from the mural wall out towards the viewer. It then transitions into a beautiful skeleton arm, decorated with sugar skull illustrations and motifs as it grabs the bottle and lifts it in celebration. With one finger, the woman then flicks the bottle cap off of the bottle and then reaches out to hand you the beer. 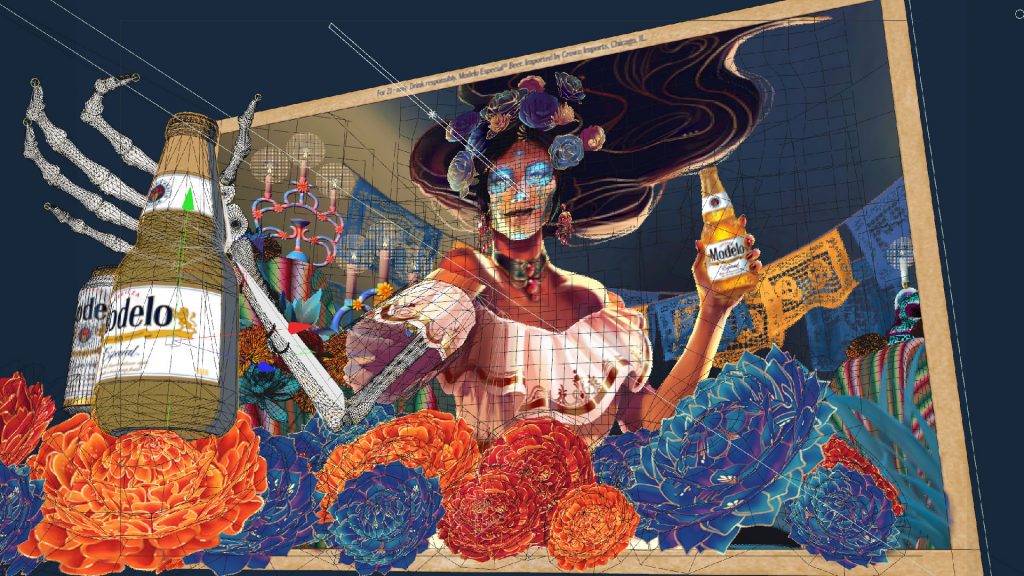 The animation ends with the candles illuminating and the background fills with marigold petals flying by. 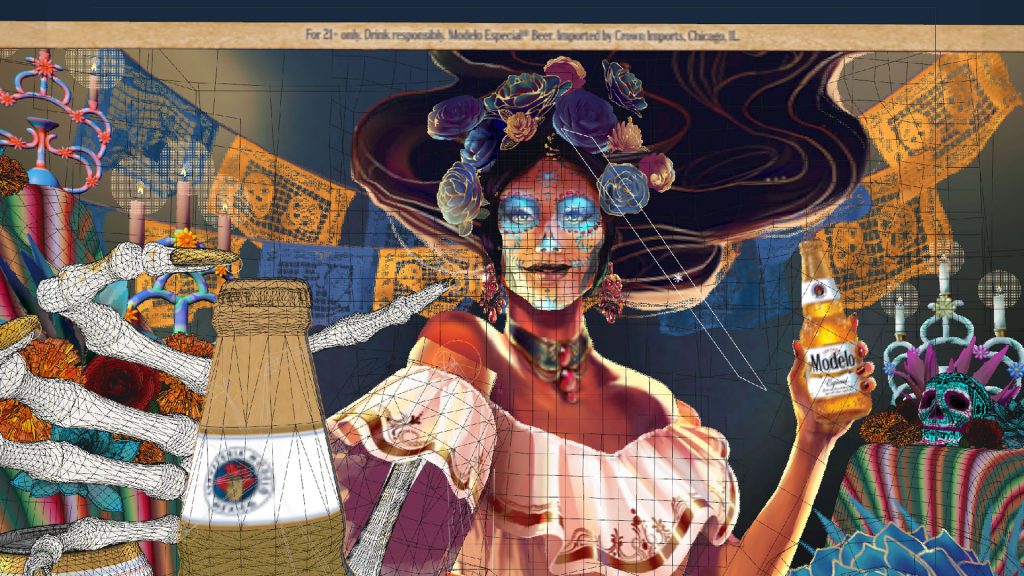 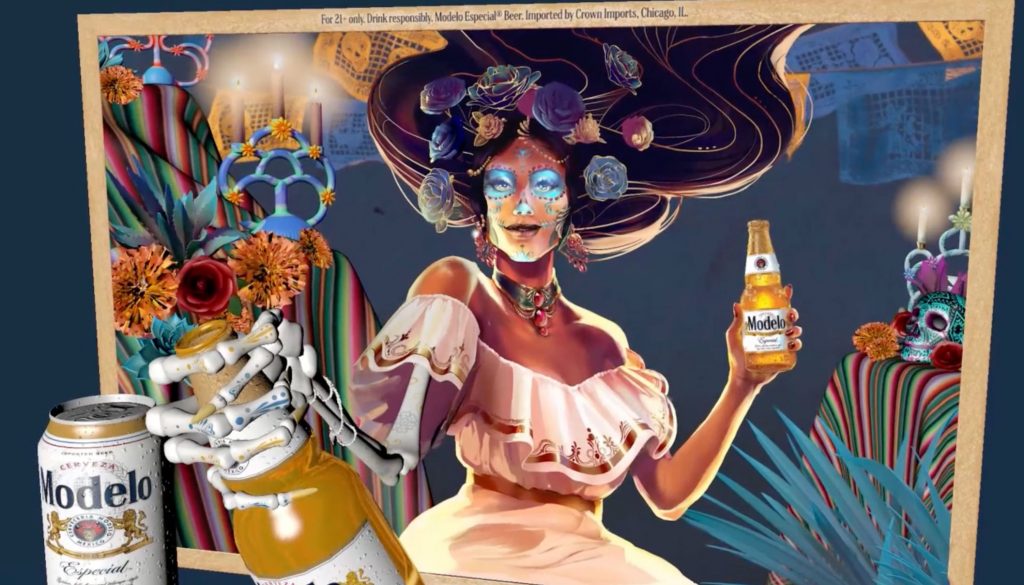 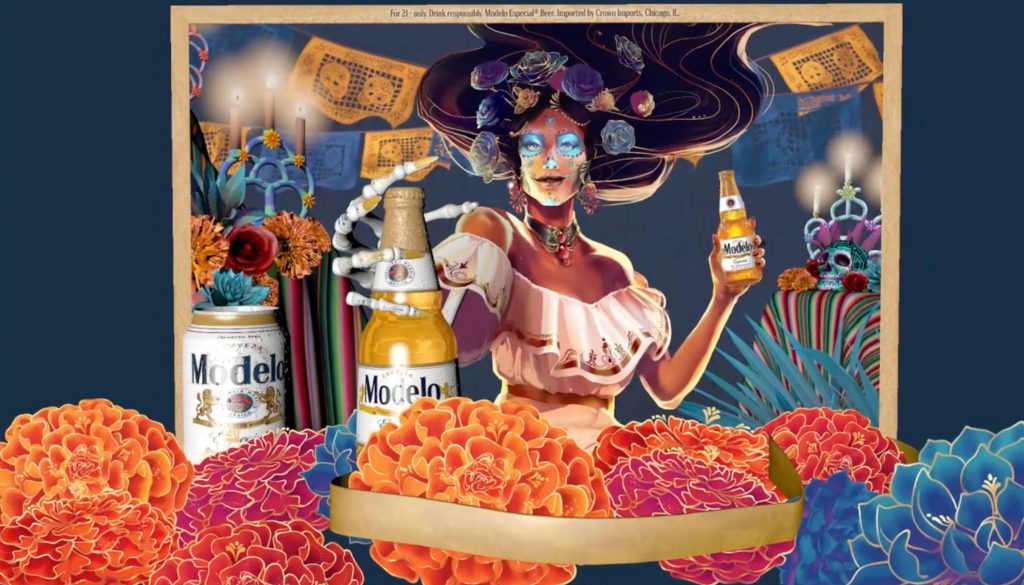 Groove Jones created the AR experience through the use of Web AR. We built the experience using Zappar’s Zap Works platform, which allows the user’s to activate the AR through their mobile web browser, alleviating the need of downloading a special App.

Participants can visit ModeloMural.com to unlock the experience. Just enter your age (21 and up only) when you hit the age gateway and then give your browser to activate your camera when prompted. Once activated, point your camera at the image below to bring the mural to life.

How to experience it at home? 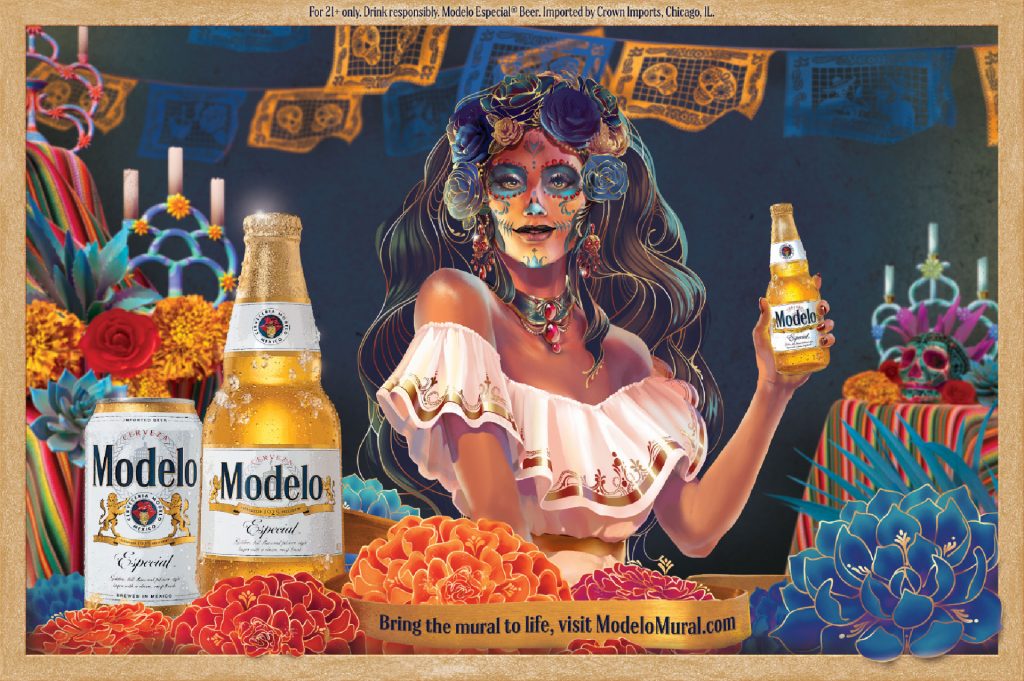 The campaign will me live through the Dia de Los Muertos celebration. 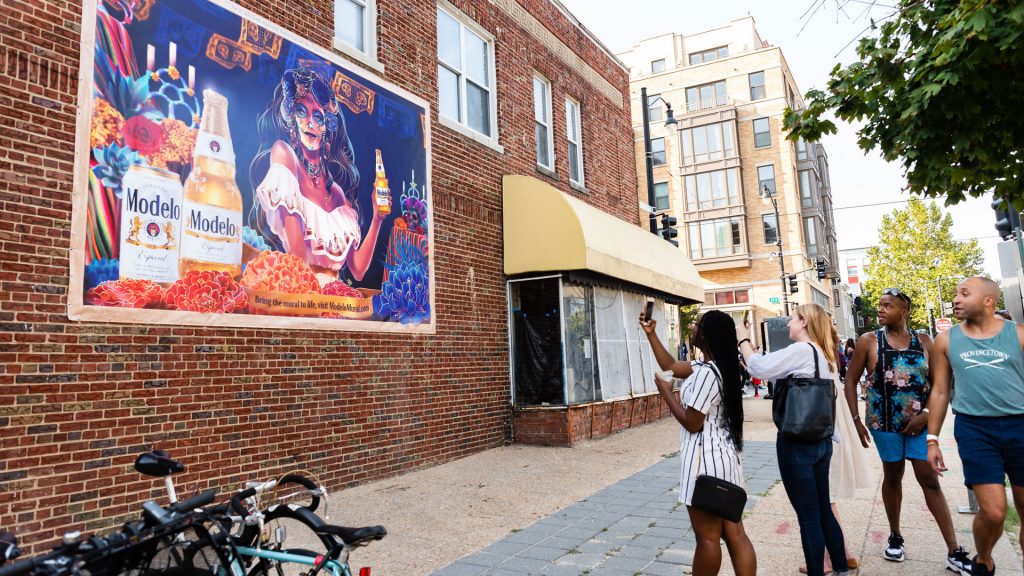 Below are samples of the other printed campaign pieces that will be used on-site. 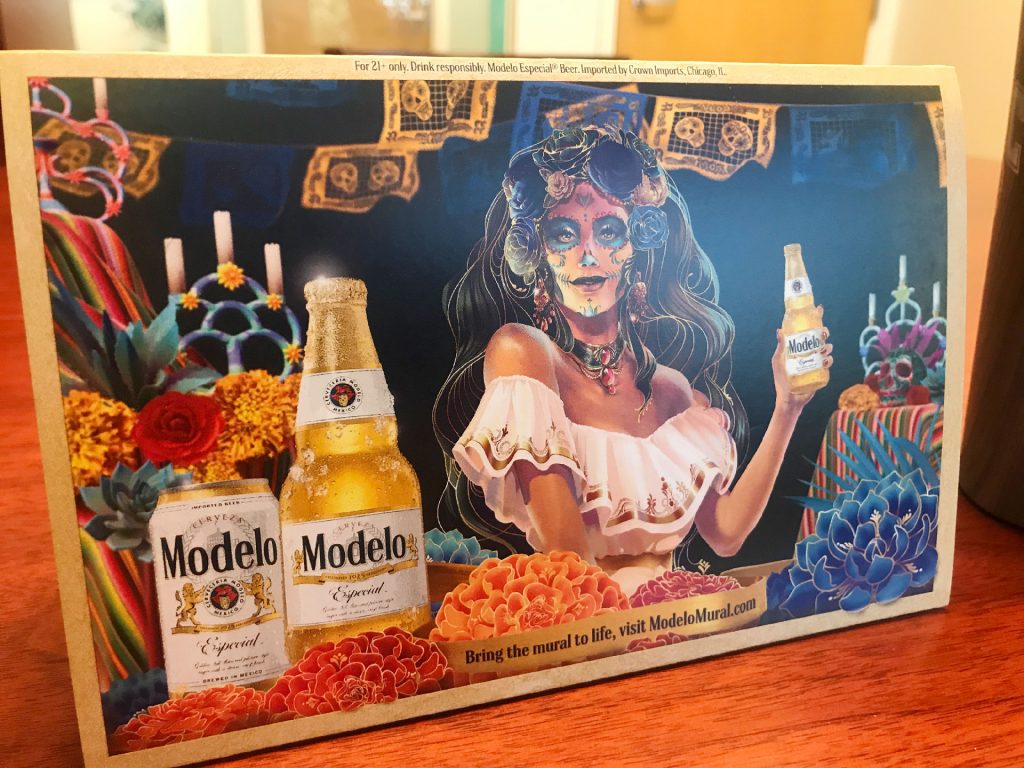 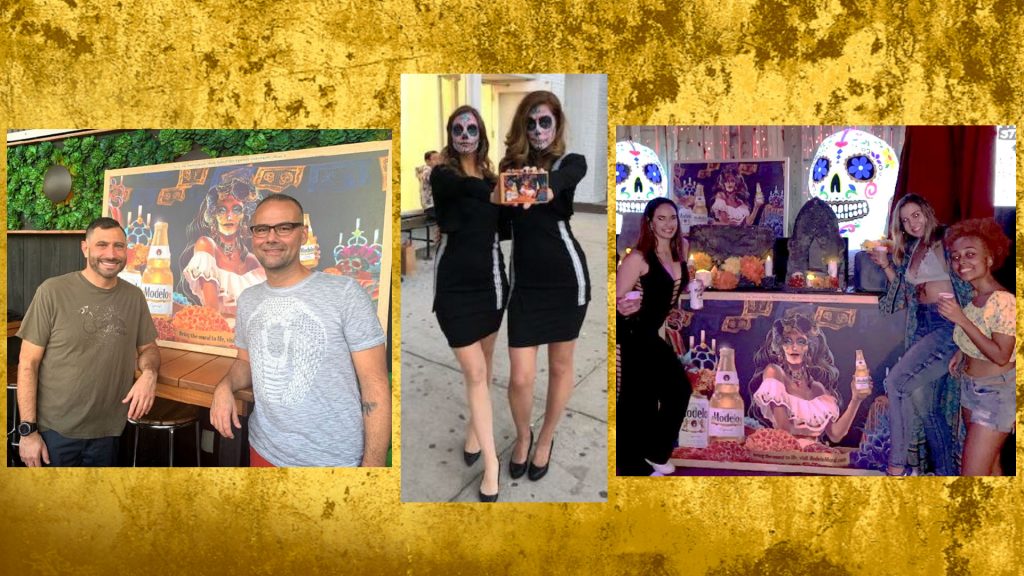 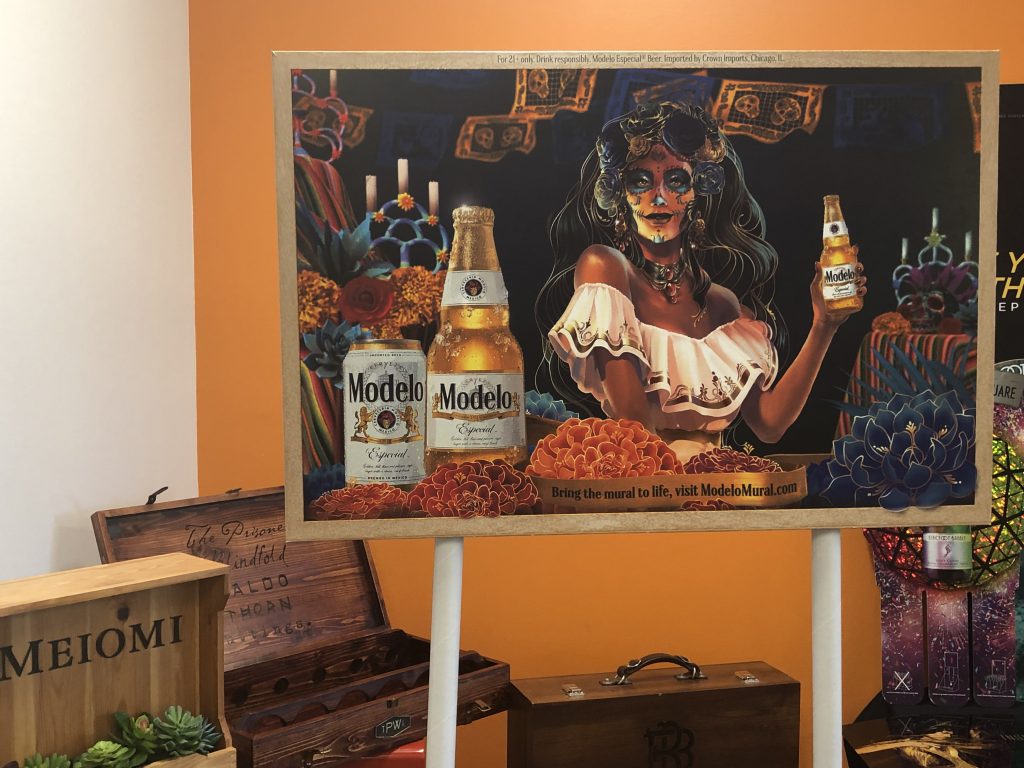 The program has won numerous awards. Below are links to the accolades it has received.

Looking to supercharge your creative or need help with an upcoming program? Reach out to us and we can help.