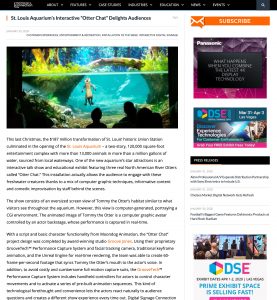 This last Christmas, the $187 million transformation of St. Louis’ historic Union Station culminated in the opening of the St. Louis Aquarium – a two-story, 120,000 square-foot entertainment complex with more than 13,000 animals in more than a million gallons of water, sourced from local waterways. One of the new aquarium’s star attractions is an interactive talk show and educational exhibit featuring three real North American River Otters called “Otter Chat.” This installation actually allows the audience to engage with these freshwater creatures thanks to a mix of computer graphic techniques, informative content and comedic improvisation by staff behind the scenes.

The show consists of an oversized screen view of Tommy the Otter’s habitat similar to what visitors see throughout the aquarium. However, this view is computer-generated, portraying a CGI environment. The animated image of Tommy the Otter is a computer graphic avatar controlled by an actor backstage, whose performance is captured in real-time.

With a script and basic character functionality from Moondog Animation, the “Otter Chat” project design was completed by award-winning studio Groove Jones. Using their proprietary GrooveTech™ Performance Capture System and facial tracking camera, traditional keyframe animation, and the Unreal Engine for real-time rendering, the team was able to create 60-frame-per-second footage that syncs Tommy the Otter’s mouth to the actor’s voice. In addition, to avoid costly and cumbersome full-motion capture suits, the GrooveTech™ Performance Capture System includes handheld controllers for actors to control character movements and to activate a series of pre-built animation sequences. This kind of technological forethought and convenience lets the actors react naturally to audience questions and creates a different show experience every time out. Digital Signage Connection caught up with Groove Jones’ Founder/Partner Dan Ferguson for more details.

“The entire experience took about three months to create,” said Ferguson. “We are able to take our GrooveTech™ platform and modify it for each individual client’s needs. One of our primary goals here was to create something that the actors could use effortlessly as they did not have a lot of technical resources. We needed it so anyone could easily step in and run the show without any deep technical training. By making the system more intuitive and making it easy to create compelling performances, it gave the aquarium a tool that was extremely flexible.”

Currently, “Otter Chat” is operated by four staff actors/actresses at a time. Using cameras mounted in the theater, the hidden actor can see the audience with whom they are interacting with, which imbues each performance with fresh life and spontaneity. Check out the video below to see Tommy the Otter in action.

“Feedback has been phenomenal … especially seeing the reactions of kids in the audience,” concluded Ferguson. “It is truly a must-see exhibit at the aquarium. The staff has also found the technology easy to use and a powerful new tool for them. They were surprised how easy it is to create a new show every day in real-time.”