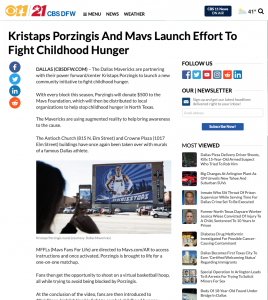 DALLAS (CBSDFW.COM) – The Dallas Mavericks are partnering with their power forward/center Kristaps Porzingis to launch a new community initiative to fight childhood hunger.

With every block this season, Porzingis will donate $500 to the Mavs Foundation, which will then be distributed to local organizations to help stop childhood hunger in North Texas.

The Mavericks are using augmented reality to help bring awareness to the cause.

The Antioch Church (815 N. Elm Street) and Crowne Plaza (1017 Elm Street) buildings have once again been taken over with murals of a famous Dallas athlete.

MFFLs (Mavs Fans For Life) are directed to Mavs.com/AR to access instructions and once activated, Porzingis is brought to life for a one-on-one matchup.

Fans then get the opportunity to shoot on a virtual basketball hoop, all while trying to avoid being blocked by Porzingis.

At the conclusion of the video, fans are then introduced to #KrisStops, highlighting his fight to combat childhood hunger.

The wallscapes will be active through December 29 and fans are encouraged to share their experiences through social media using the hashtags #KrisStops and #mavsAR.

The creative and technology studio Groove Jones produced the AR experience, with creative direction from the Dallas Mavericks, by taking both photo and video assets to bring the augmented reality to life.

For more information on the #KrisStops campaign, click here.