Experience “one of the greatest fossil discoveries of the past half-century” as described by National Geographic in the new Origins exhibit at the Perot Museum of Nature and Science. Two new species of ancient human relatives, Australopithecus sediba and Homo naledi made worldwide headlines and provided game-changing insights into the origins of humanity. Fossils of each species left South Africa to be on public display for the first time in a world-exclusive, six month engagement in Dallas, Texas. This is an incredibly rare opportunity to see real hominin material in North America.

Groove Jones worked with the Perot Museum team on a variety of components for the exhibit, including an interactive AR (Augmented Reality) hands-on experience that allows visitors to dig for fossils as if you were on location in South Africa as well as lighting and animated graphics packages being projected on walls at the exhibit. 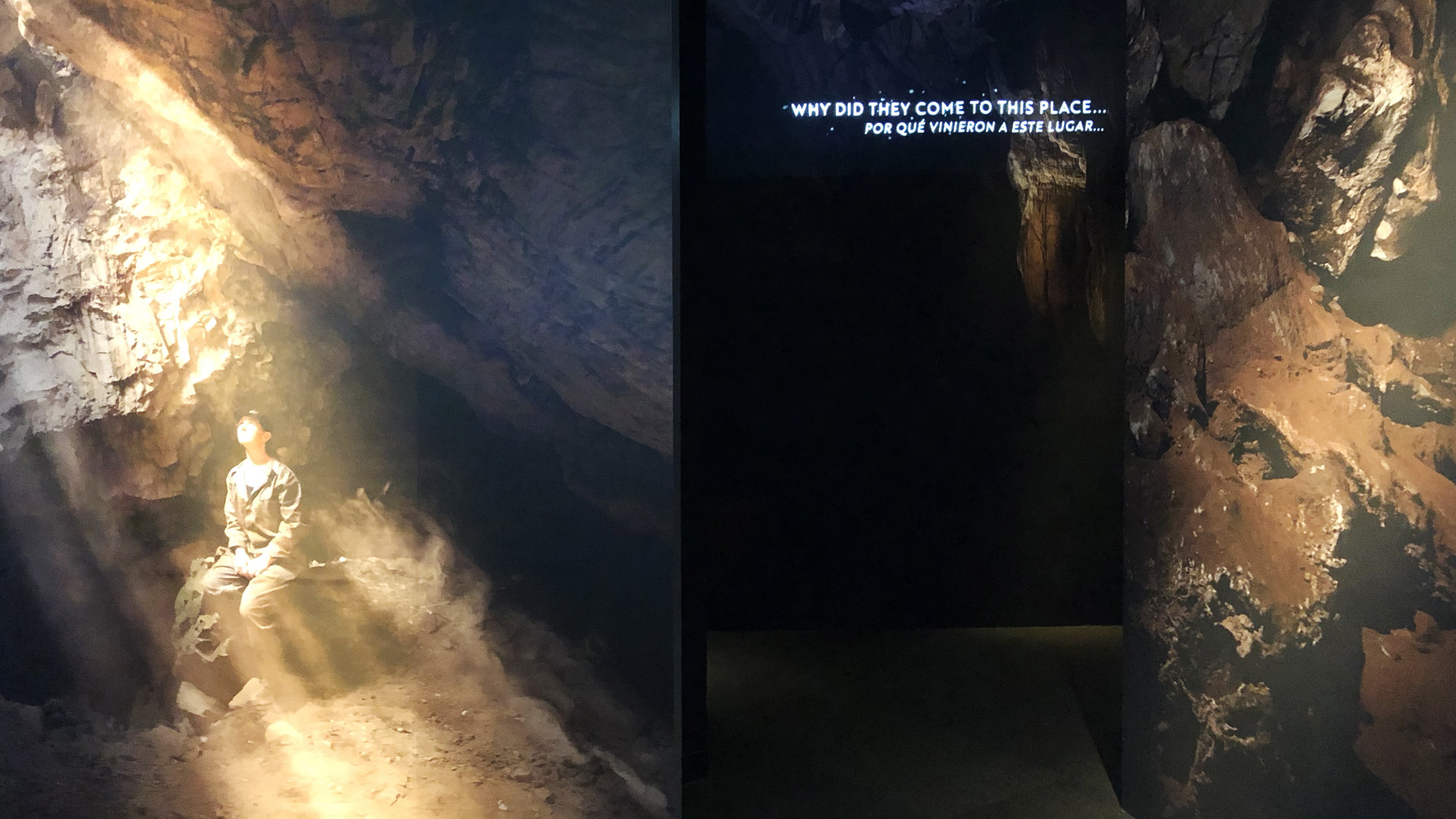 The 5,000 square-foot exhibition centers around the fossil skeletons of two individuals – one from each species – and tells the incredible story of the discovery, excavation, and research by an international team of brave and dedicated scientists. Visitors are then invited to step into the shoes of a real paleoanthropologist in the interactive Dig Site, where handheld tablets outfitted with special augmented reality radar technologies lead these budding researchers to find and analyze fossil replicas. 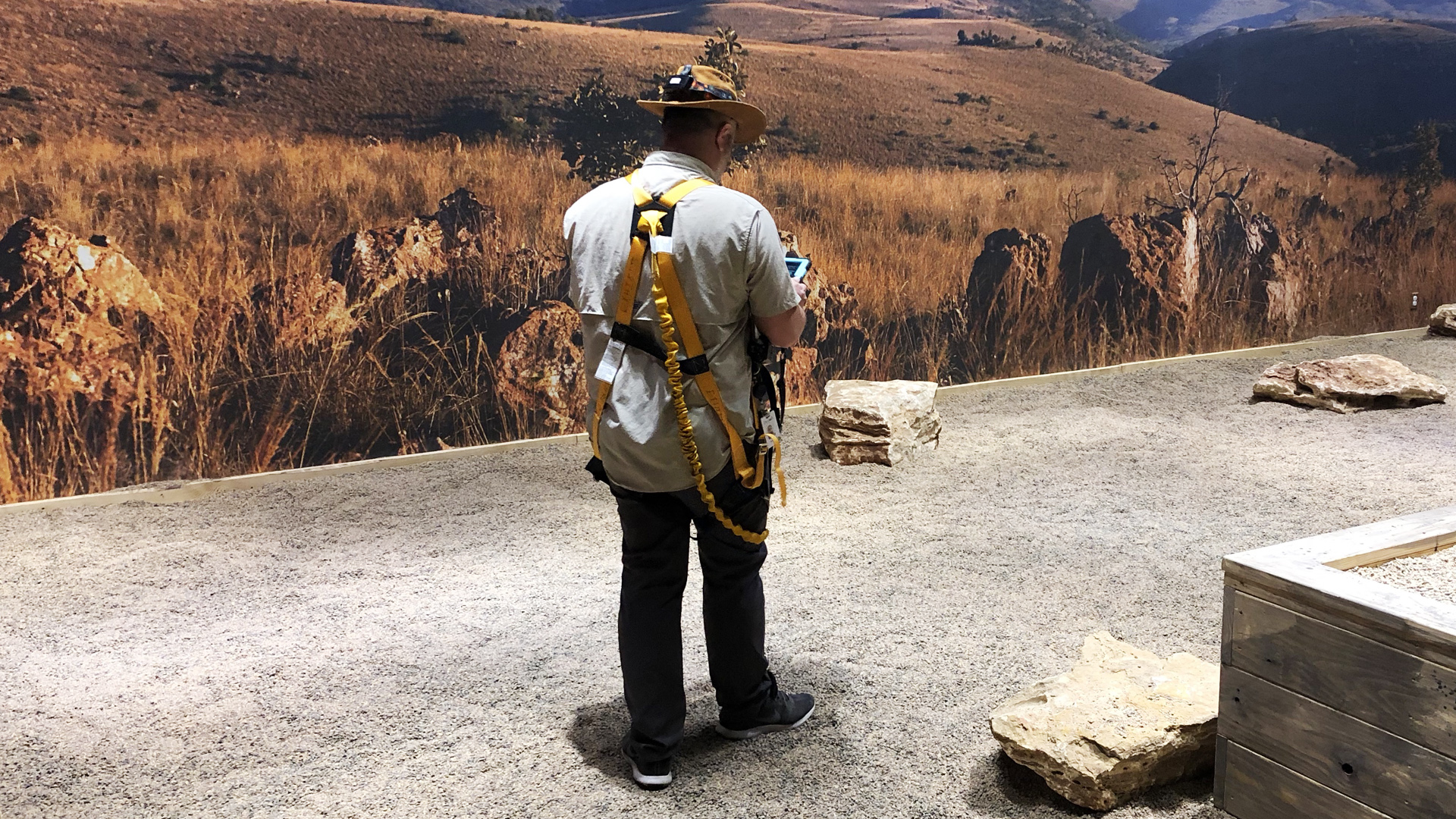 Have you ever wanted to go on an adventure and find fossils? Now you can at the Perot Museum in a specially constructed Dig Site built within the Origins exhibition. Visitors get the chance to step into a scene inspired by the actual dig site in the Cradle of Humankind in South Africa and practice archeology using the ARTIFAX tool which helps them locate fossils buried deep in the soil. 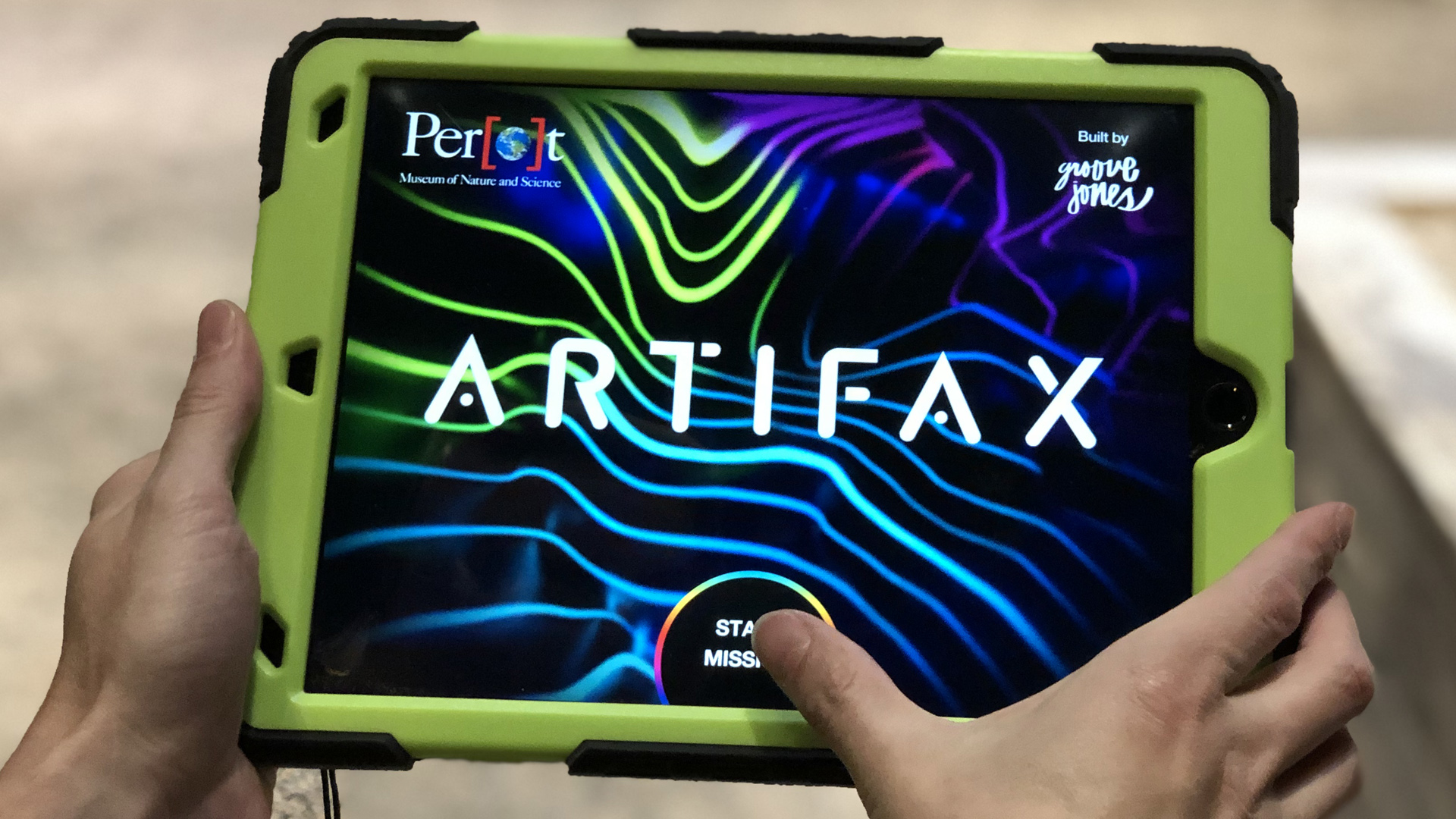 Visitors are greeted by brand ambassadors at the Dig Site where they are given specially outfitted iPads tablets, running the custom-built App named ARTIFAX created by Groove Jones. ARTIFAX uses augmented reality to give users a simulated x-ray view into the ground, helping them to detect fossils found within the dig site, then digitally collect and inspect them in the App. 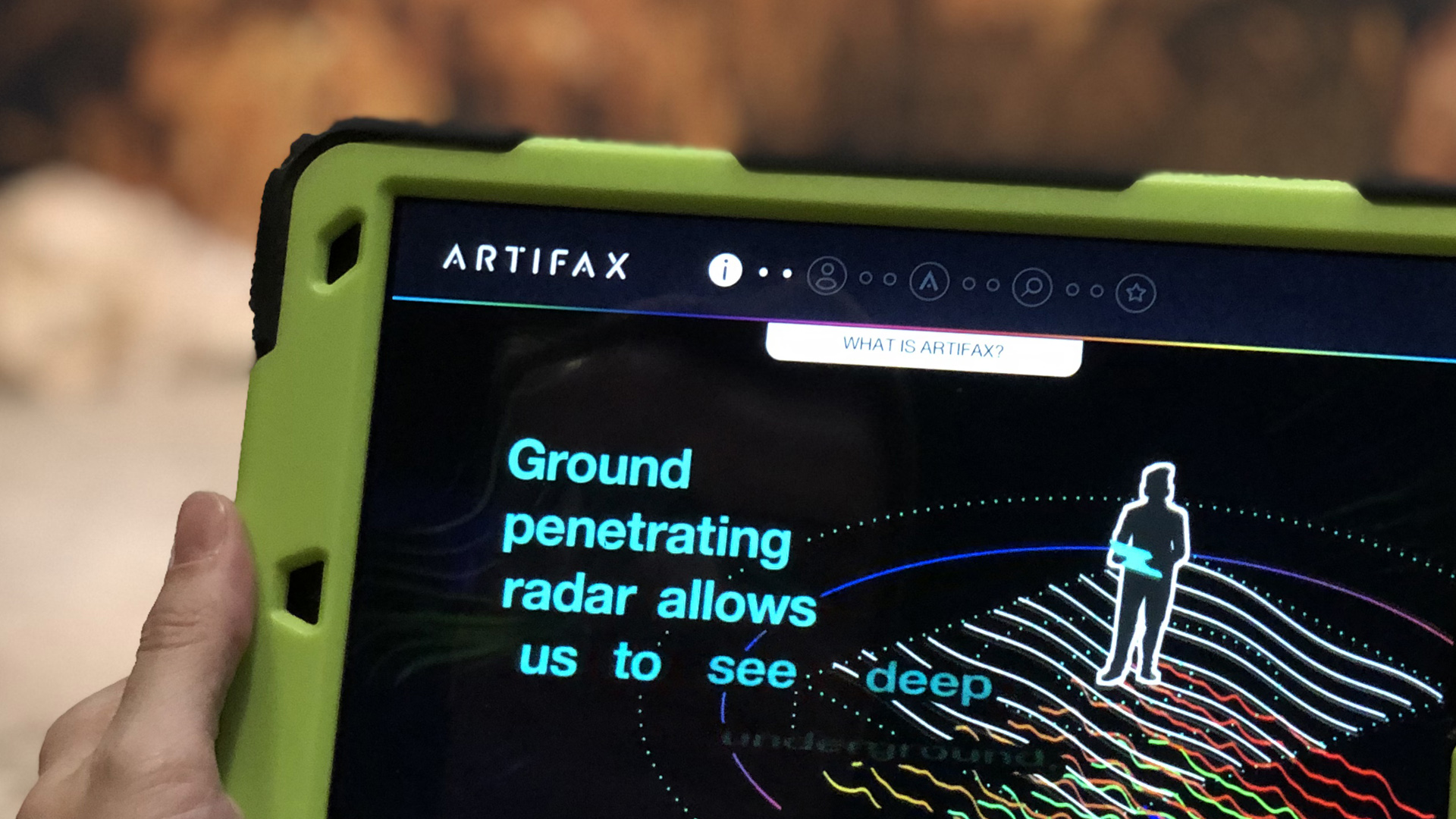 Users then venture into the tent-research area to help identify the fossil as they answer questions based on the fossil they found assisted by the narration of some of the actual scientists that helped make the discoveries! 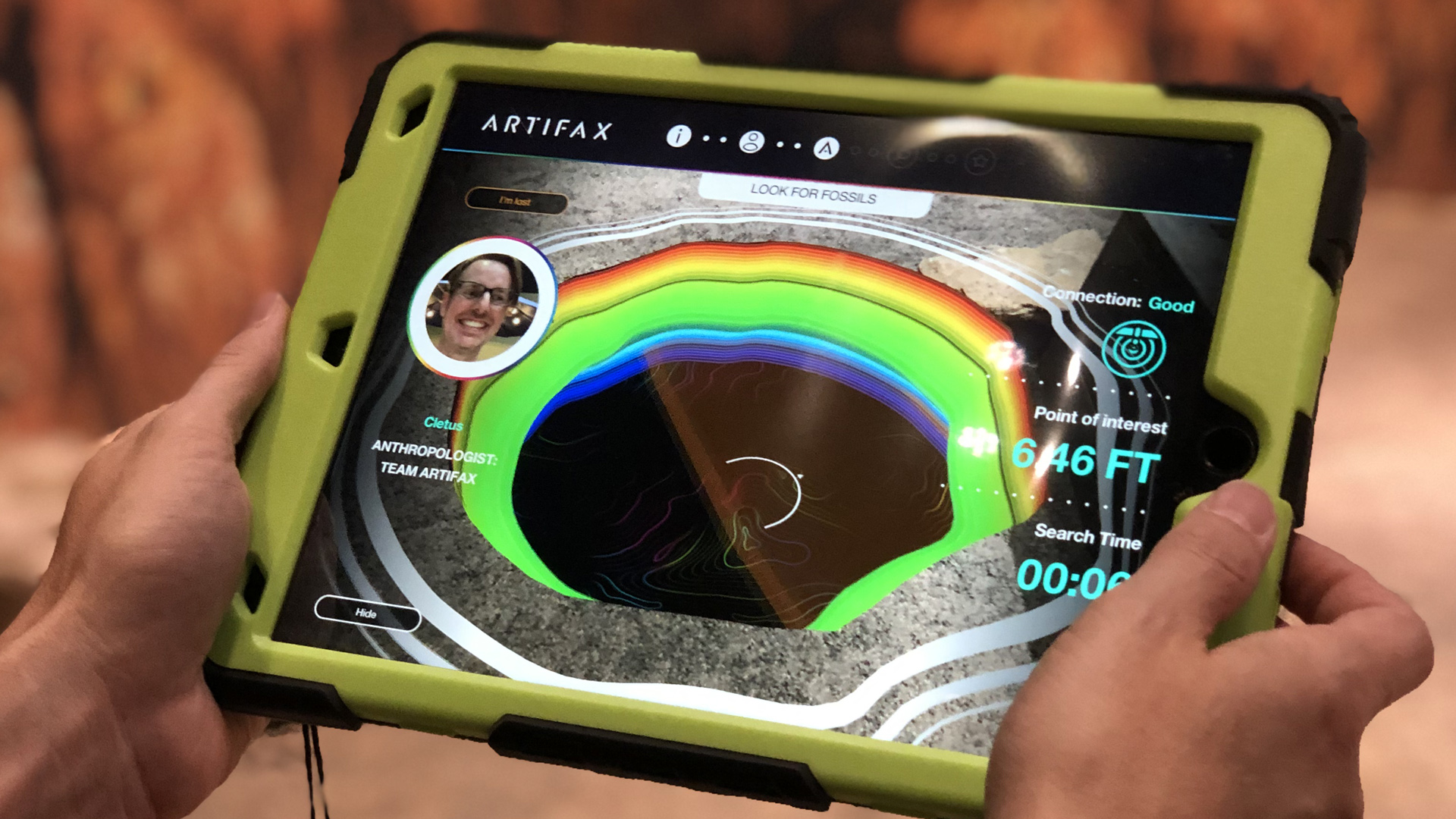 Upon launching the App, visitors are prompted to take a selfie and enter their name. (This is important as it will be used for your certificate upon finding and collecting any fossils on site.) Visitors then scan the Dig Site’s horizon where the App registers your location and then displays a radar animation to help direct you to any fossils in your area. When you point the tablet towards the ground, it then displays a radar view of what is under the ground. 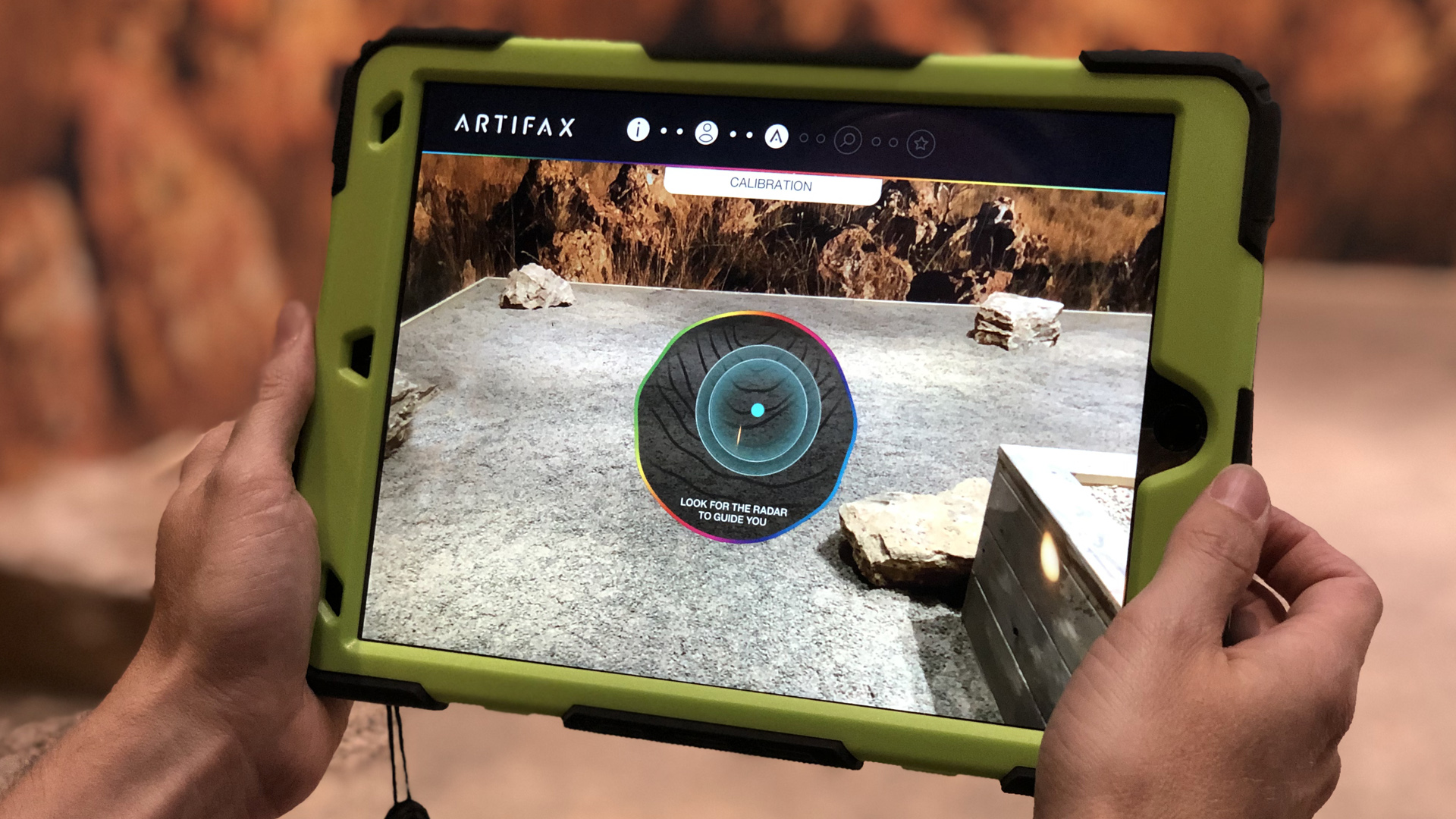 Up to 10 people can venture out into the oversized Dig Site at a time. The ARTIFAX App uses a cloud-based system to dynamically assign specific fossils to the visitors that are venturing into the Dig Site. This allows the system to manage what fossils are available to find at a specific time and to distribute people throughout the Dig Site. In this experience, everyone is a winner and gets their own fossil objective to find.

Not every radar signal hit is a fossil, however. The team added JAR (Just Another Rock) signals to make the experience more realistic. JAR is a term used by archeologists when they are searching for fossils, and show up quite frequently in actual dig sites. This helped create a more realistic experience. In the end, every participant will get a fossil. 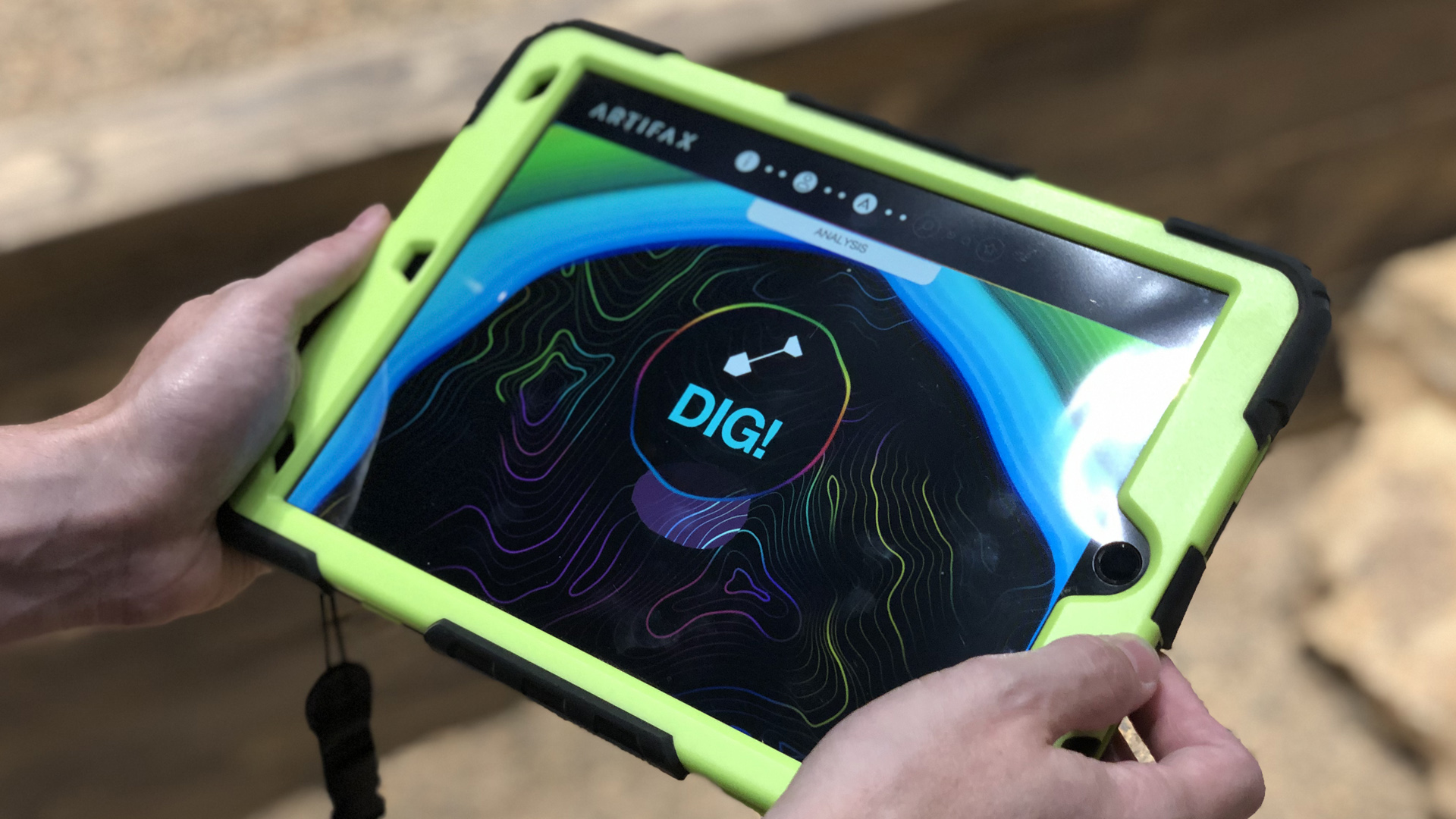 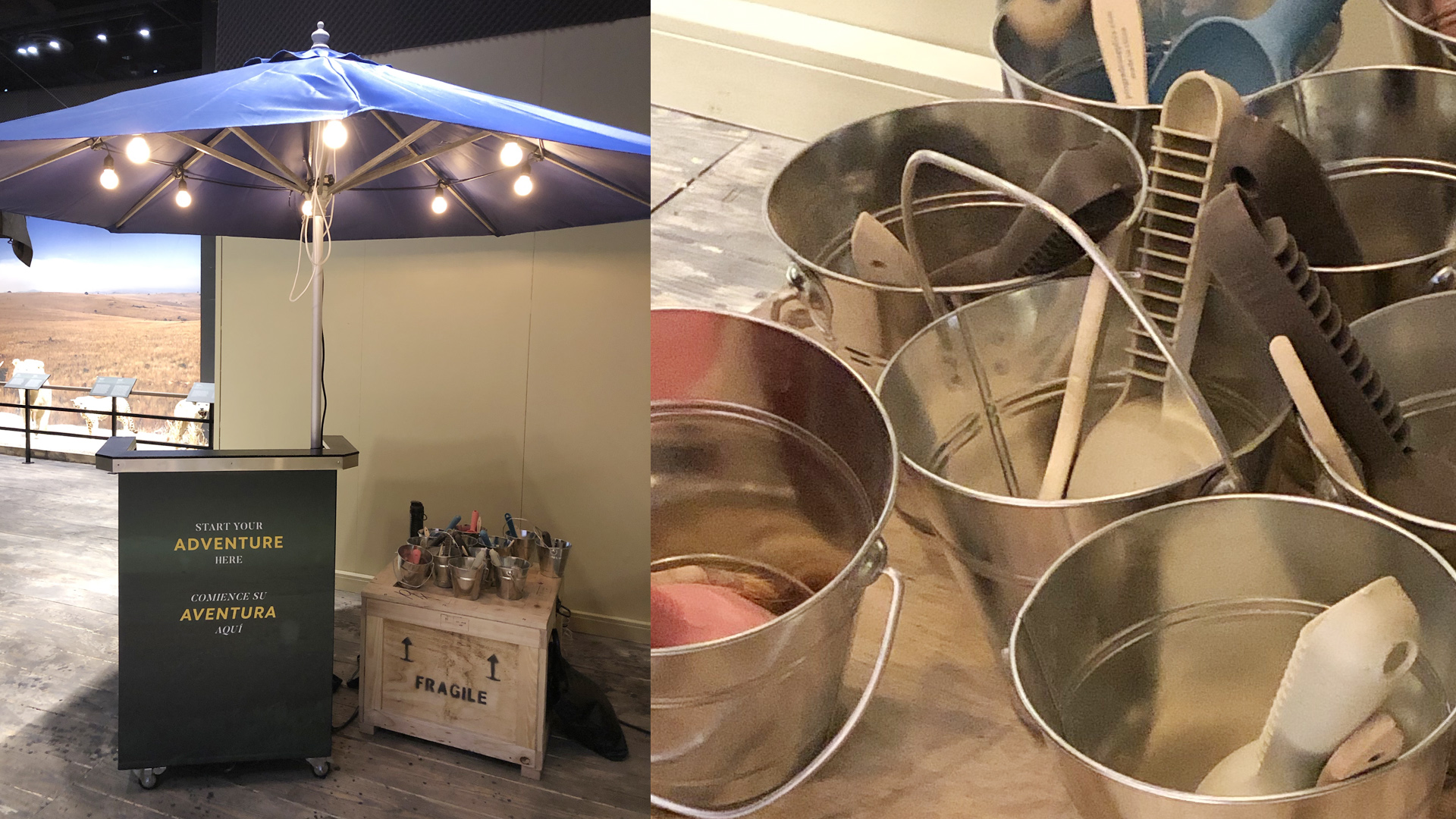 Once found, you must dig deep and uncover the fossil. Each visitor is equipped with a bucket filled with a brush and shovel. When the fossil has been uncovered, they must use the tablet’s camera to scan and digitally capture it. The App will recognize the find, and then instruct the visitor to go to the research tent to learn about the fossil. 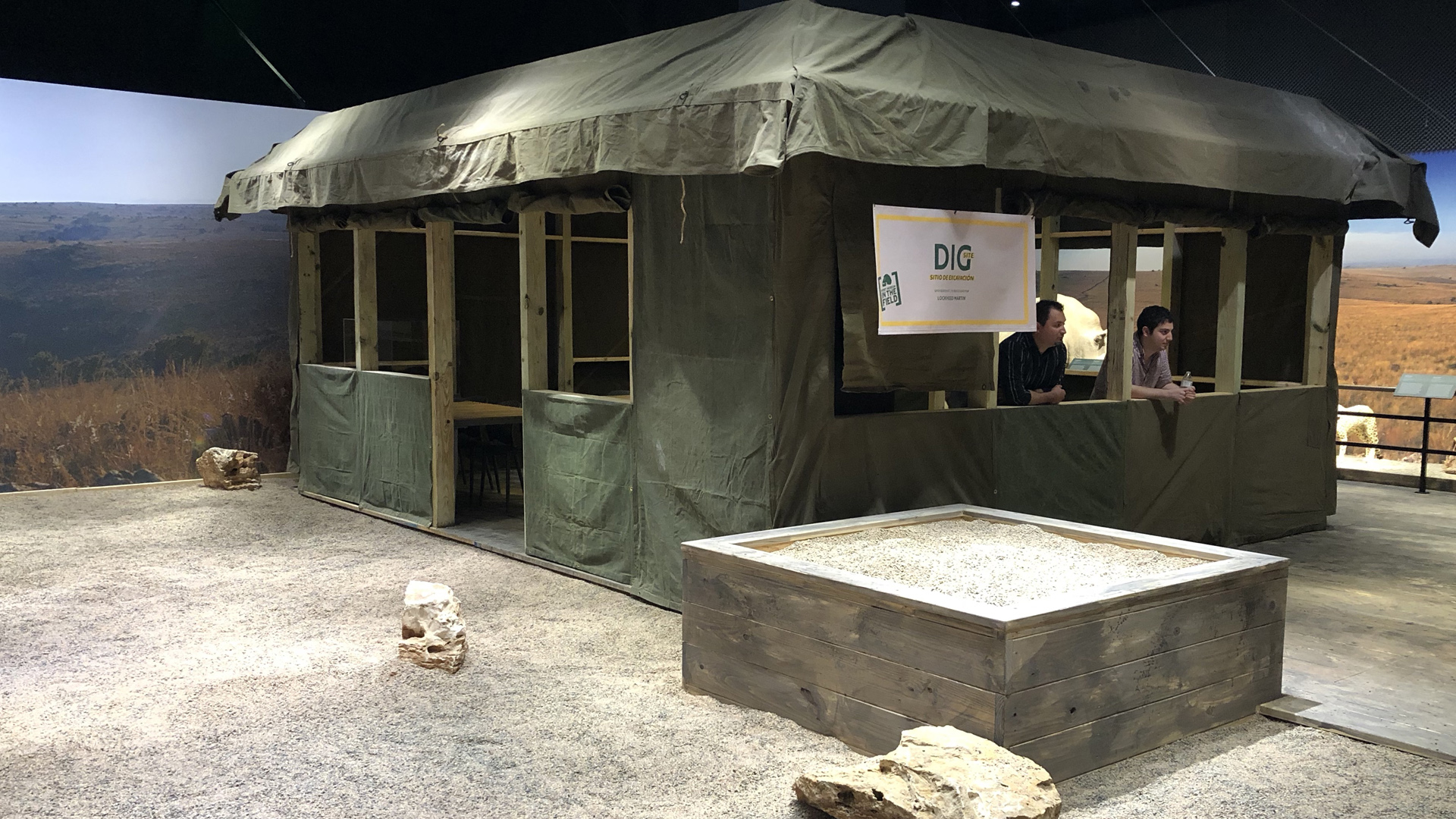 A 3D image of the fossil appears onscreen and can be inspected by swiping with a finger. A variety of interesting facts are also displayed about the fossils. For example: 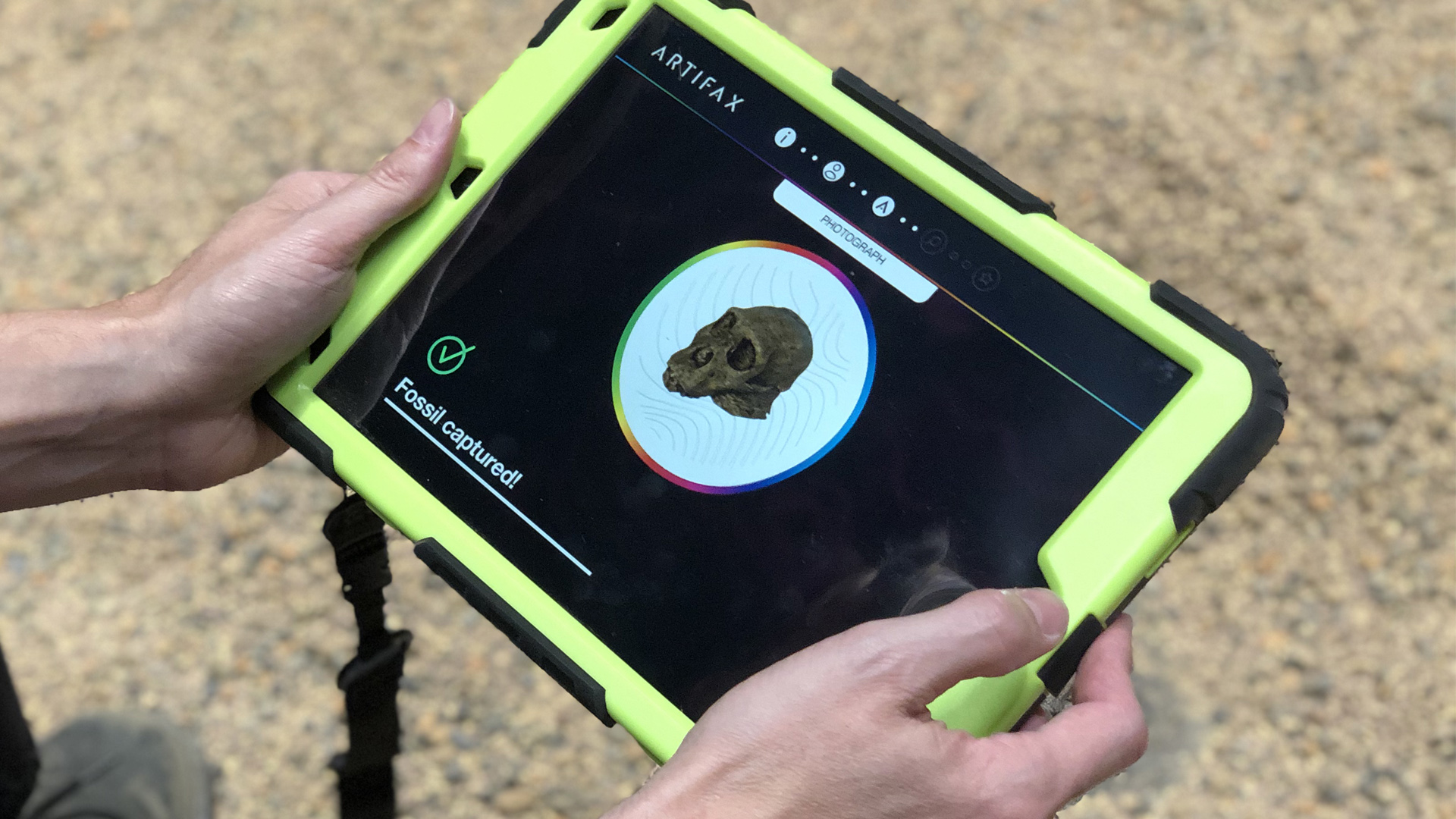 Below is a screen capture of the AR experience as well as the final inspection and certificate.

At the end of the experience, visitors are giving the chance to receive a certificate of their fossil find. By adding their email address (or their parents ‘ if you are a kid) they will receive a digital certificate with facts and a photo of their fossil find. Remember that selfie that the visitors took at the beginning of the experience? That selfie photo is also included at this time. 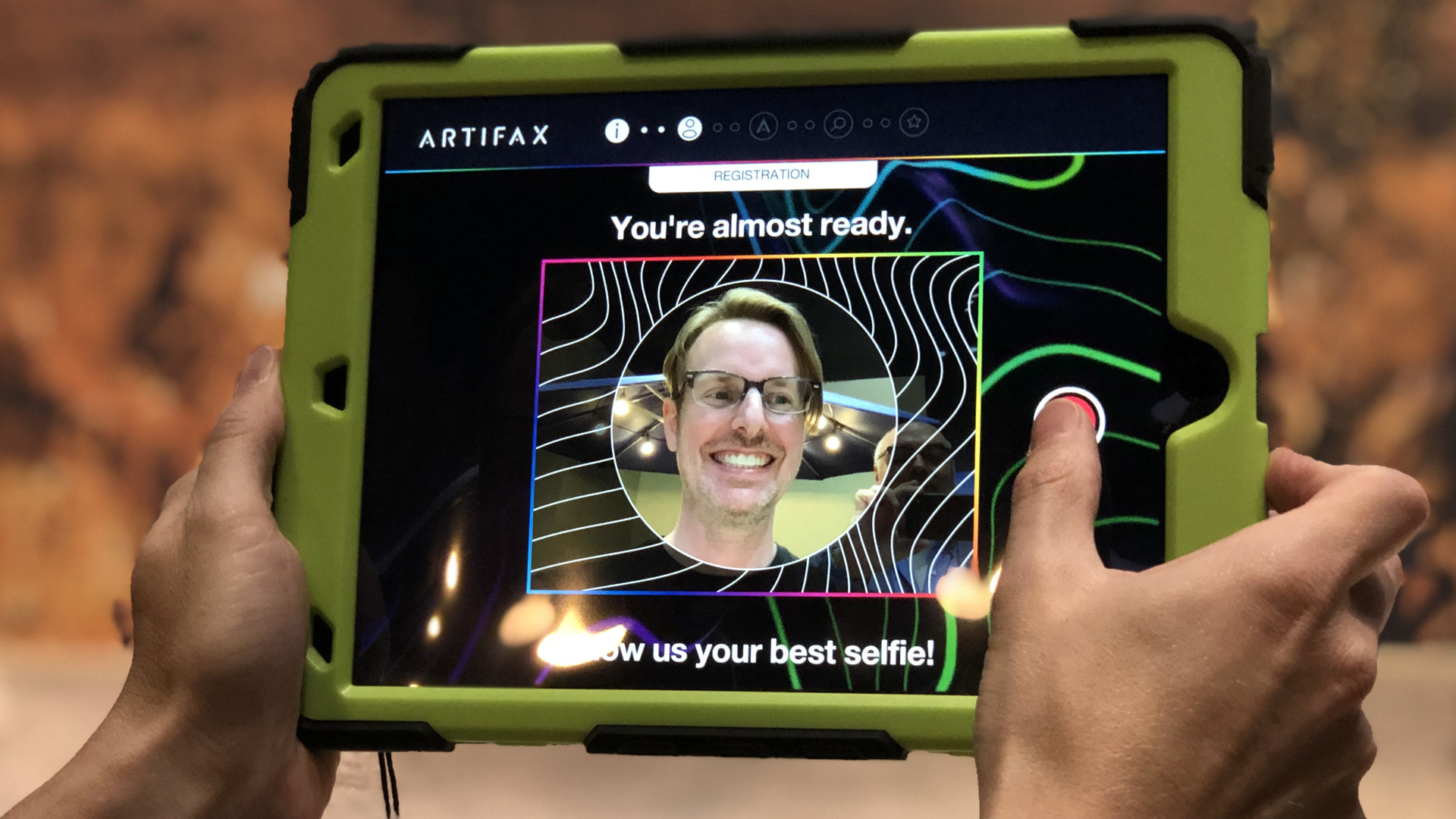 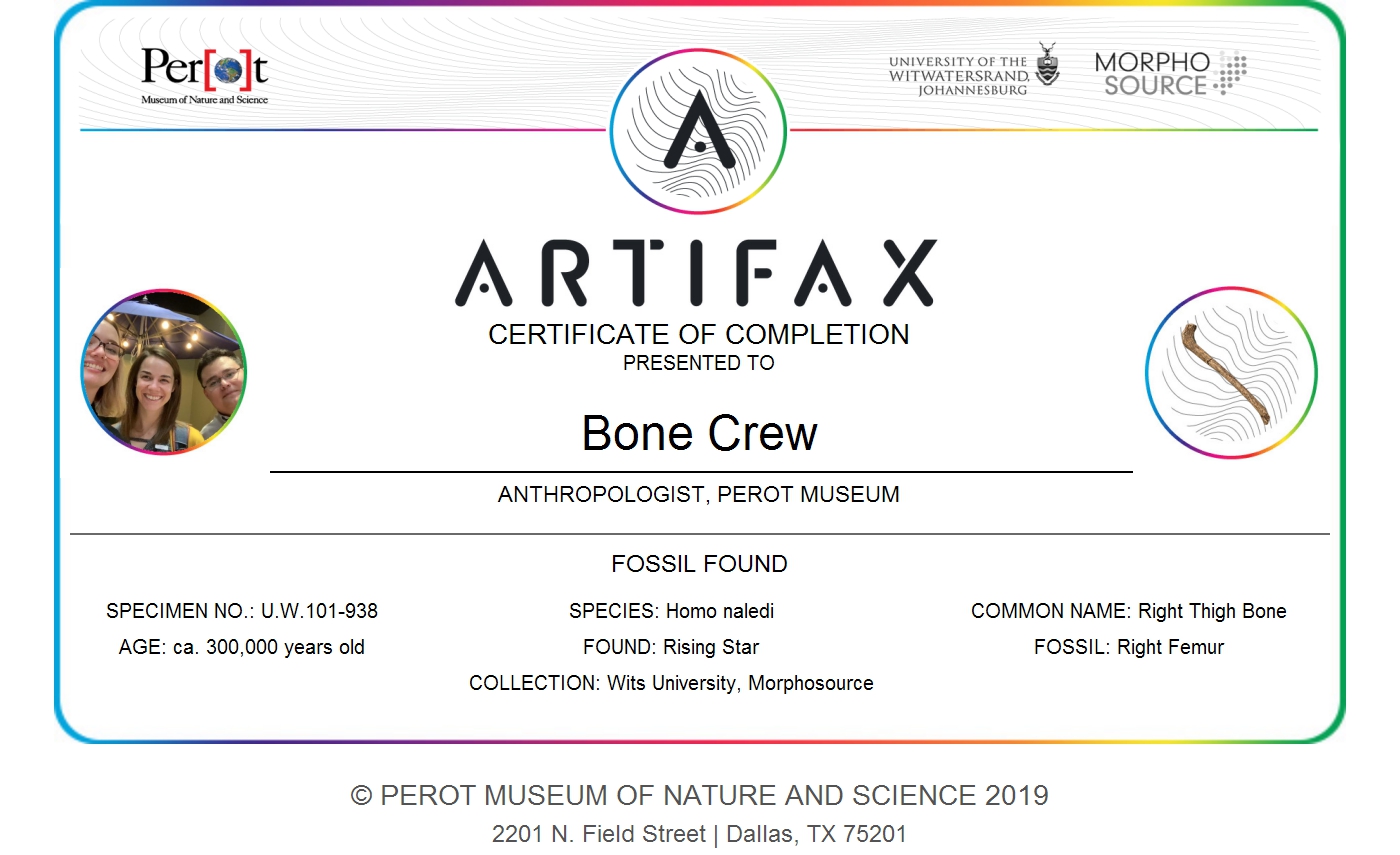 Origins: Fossils From the Cradle of Humankind Exhibit

The Perot Museum of Nature and Science, in partnership with the University of the Witwatersrand (Wits University) and the National Geographic Society, have opened and exciting exhibit showcasing fossils of two recently discovered ancient human relatives (Australopithecus sediba and Homo naledi). The exhibit, Origins: Fossils from the Cradle of Humankind is featured in a limited-run exhibition. 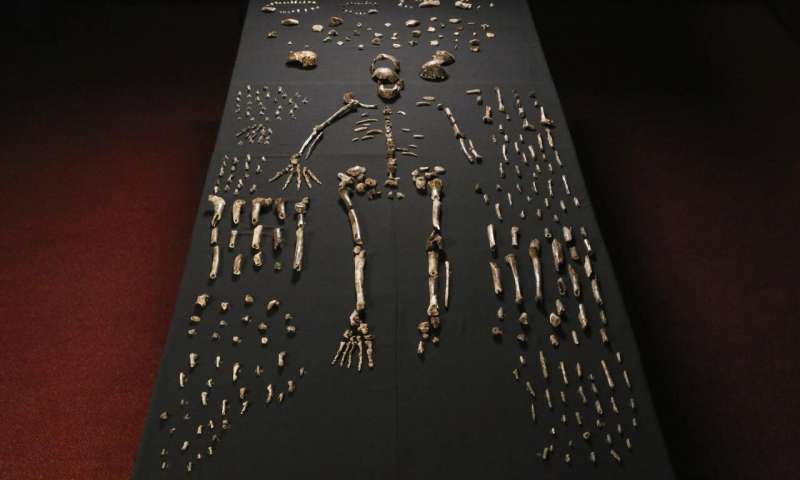 This exhibition marks the first time that ancient hominin fossils have traveled for public display since “Lucy” (Australopithecus afarensis) between 2007 and 2013. Discovered in 2008 by then nine-year-old Matthew Berger, Australopithecus sediba were some of the most complete hominin skeletons known in the fossil record at the time. 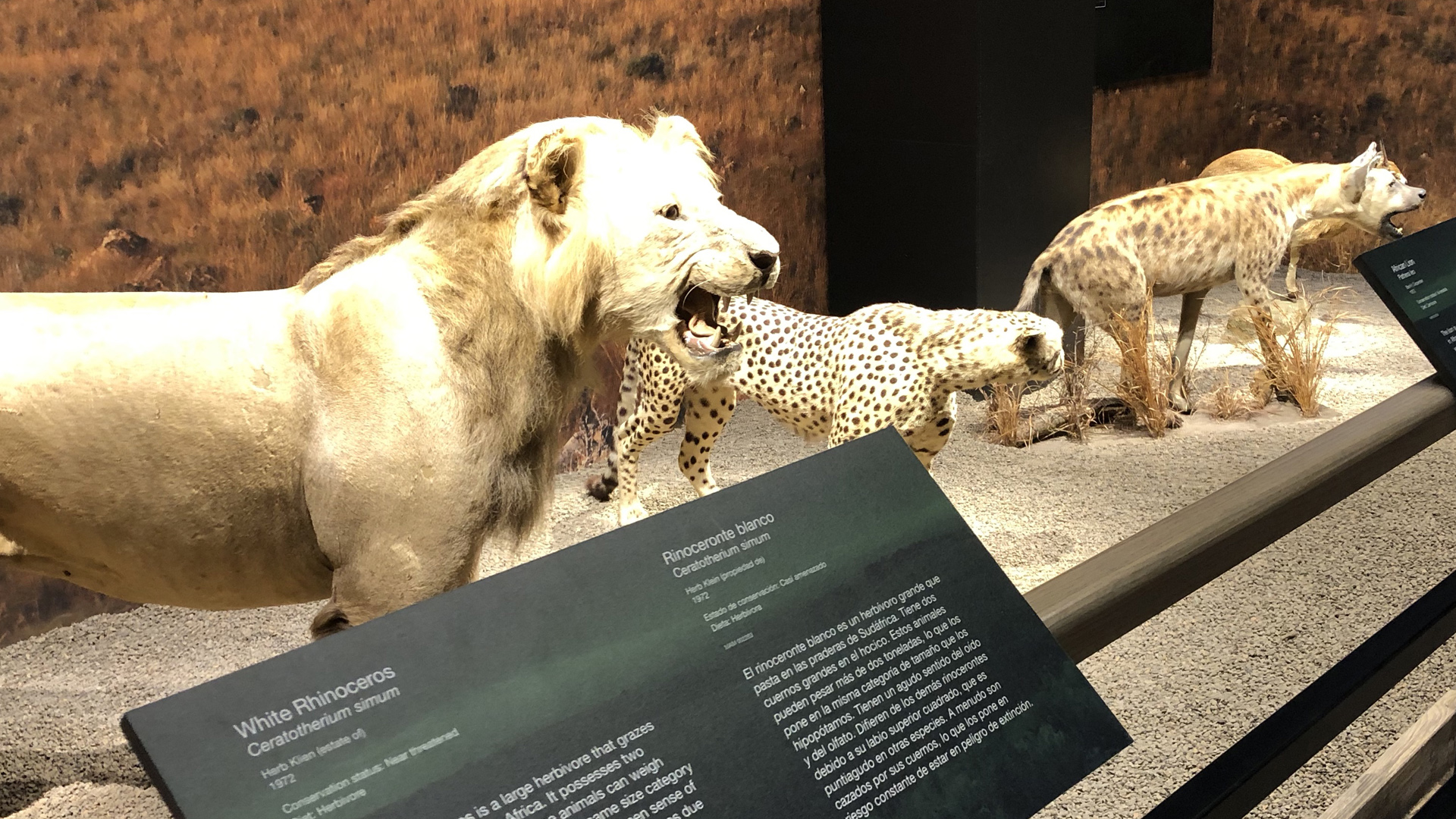 Just five years later, the first fossils of another new ancient relative, Homo naledi (formally described in 2015), were dramatically unearthed in South Africa by a Wits University team including the Perot Museum’s Dr. Becca Peixotto, director and research scientist of the Center for the Exploration of the Human Journey. Together, these two remarkable discoveries provide further evidence for the complex and nuanced processes of human evolution. 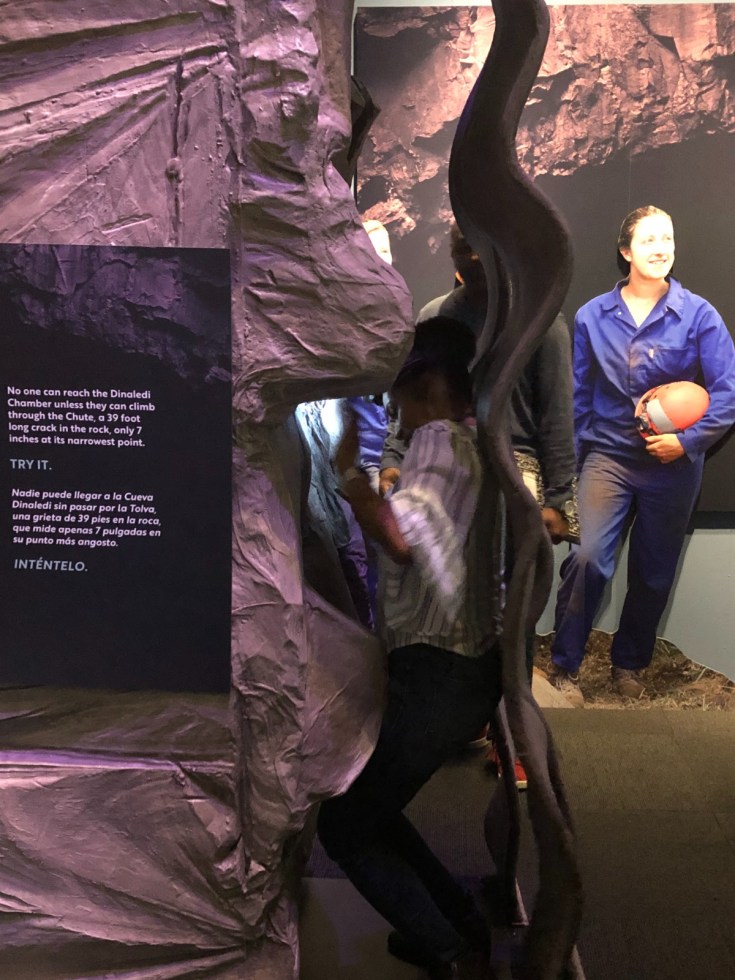 Origins: Fossils from the Cradle of Humankind will bring to life years of scientific research tied to the Perot Museum’s recently launched Center for the Exploration of the Human Journey, a global hub for education, communication and research in the study of human origins. The exhibition showcases the collaboration and dedication demonstrated by a diverse, multinational scientific team of women and men, led by world-renowned paleoanthropologist and National Geographic Explorer-at-Large, Professor Lee Berger of Wits University. Berger also serves as the distinguished science advisor for the Perot Museum’s Center for the Exploration of the Human Journey

Groove Jones also worked with the Perot Museum team on graphical and art video projection that can be seen throughout the exhibit. The exhibit will be available from October 19, 2019—March 22, 2020. For more information visit – https://origins.perotmuseum.org/ 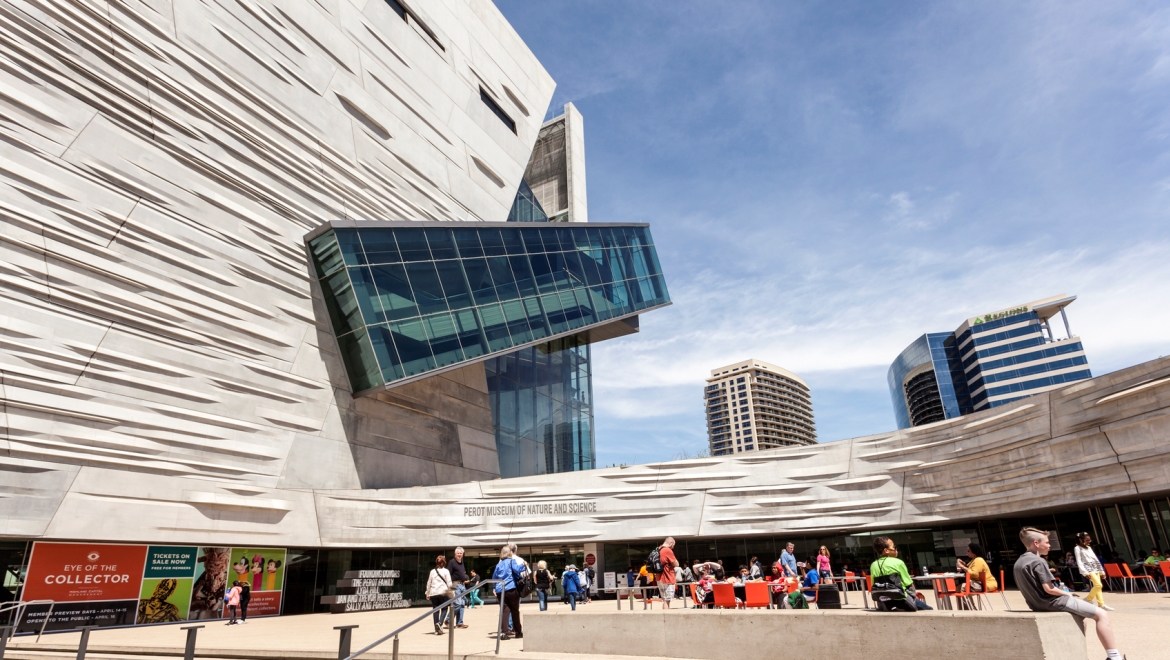 About the Perot Museum of Nature and Science. The top cultural attraction in Dallas/Fort Worth and a Michelin Green Guide three-star destination, the Perot Museum of Nature and Science is a nonprofit educational organization located in the heart of Dallas, Texas. With a mission to inspire minds through nature and science, the Perot Museum delivers exciting, engaging and innovative visitor and outreach experiences through its education, exhibition, and research and collections programming for children, students, teachers, families and life-long learners. The 180,000-square-foot facility in Victory Park opened in December 2012 and is now recognized as the symbolic gateway to the Dallas Arts District. Future scientists, mathematicians and engineers will find inspiration and enlightenment through 11 permanent exhibit halls on five floors of public space; a children’s museum; a state-of-the art traveling exhibition hall; and The Hoglund Foundation Theater. Designed by 2005 Pritzker Architecture Prize Laureate Thom Mayne and his firm Morphosis Architects, the Victory Park museum has been lauded for its artistry and sustainability. To learn more, please visit perotmuseum.org

About the National Geographic Society. The National Geographic Society is a global nonprofit organization that uses the power of science, exploration, education and storytelling to illuminate the wonder of the world, define critical challenges and catalyze action to protect our planet. Since 1888, National Geographic has pushed the boundaries of exploration, investing in bold people and transformative ideas, providing more than 14,000 grants for work across all seven continents, reaching 3 million students each year through education offerings, and engaging audiences around the globe through signature convenings and content. To learn more, visit nationalgeographic.org.

About the University of the Witwatersrand. Wits University is a research-intensive University, one of the leading institutions on the African continent that produces world-class research that is locally relevant and globally competitive. Wits is a global leader in the paleosciences, one of its key research areas. Wits’ research output has increased by over 45% in the last four years with more than 85% of its research published in international journals. Wits offers a free space for the exchange of ideas and a vibrant intellectual community that fosters debate and knowledge transfer both within and beyond our lecture halls. Wits’ latest research available at wits.ac.za/research.