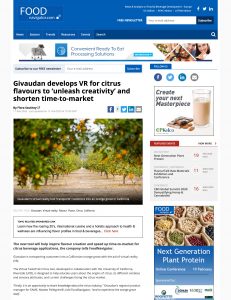 The new tool will help inspire flavor creation and speed up time-to-market for citrus beverage applications, the company tells FoodNavigator. Givaudan is transporting customers into a Californian orange grove with the aid of virtual reality (VR). The Virtual TasteTrek Citrus tool, developed in collaboration with the University of California, Riverside (UCR), is designed to help educate users about the origins of citrus, its different varieties and sensory attributes, and current challenges facing the citrus market. 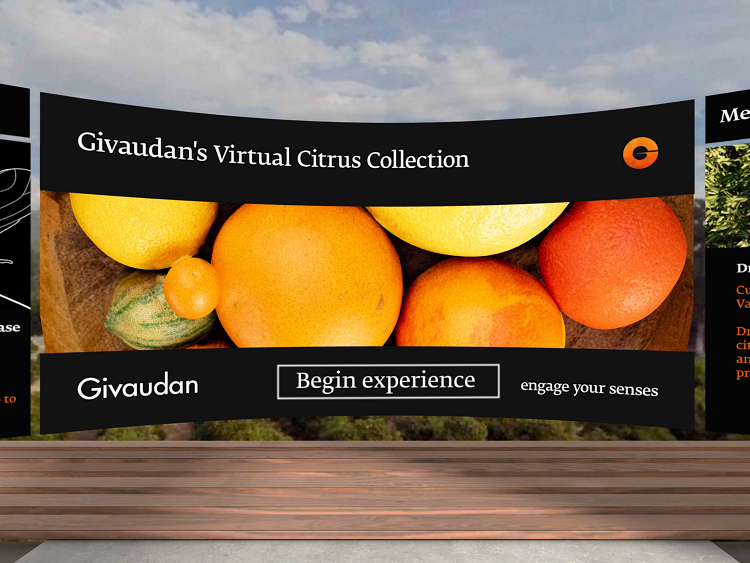 “Firstly, it is an opportunity to share knowledge about the citrus industry,” Givaudan’s regional product manager for EAME, Matteo Pellegrinelli, told FoodNavigator, “and to experience the orange grove itself.

“And secondly, it helps with flavour creation. [The VR tool] will enable the customer to create flavour directly from the desk.”

The Virtual TasteTrek Citrus tool combines sight, sound and smell to give customers the illusion of standing in the middle of a citrus grove in California. That grove belongs to UCR’s Citrus Variety Collection, which boasts one of the most extensive citrus diversity collections in the world. More than 1,000 different varieties of citrus, or citrus-related, fruit grow here. The site was first established in the early 1900s and today occupies over 22.3 acres.

When customers put on the VR headset – connected to Givaudan’s Virtual Aroma Synthesiser (VAS) technology – and headphones, they are invited on a virtual tour of UCR’s citrus grove.

Users can stroll through the citrus collection, stopping to learn about fruit varieties from UCR’s citrus collection curator, Dr Tracy Kahn, as she speaks with Geoff Marshall-Hill, principal $avourist at Givaudan. She may even slice a piece of fruit for Marshall-Hill to taste, and for the VR user, to smell.

It is here that the Virtual TasteTrek Citrus tool can help inspire, encouraging customers to create a personalised citrus $avour, ‘all from the comfort of one’s office’.

“You smell something, you see it in front of you, it helps you to get in the mood to create your flavours – and our customers will appreciate that.”

‘Unleashing’ creativity for a shorter time-to-market

“Experiencing first-hand some of the unique and surprising aroma profiles the fruits have to offer helps our customers unleash their creativity,” – Dawn Streich, global product manager for citrus at Givaudan.

For Givaudan, it marks the first time customers will be able to ‘visually create a flavour’, according to Pellegrinelli. And in this way, the technology could significantly reduce time-to-market.

“You just live it,” added Axel Boettcher, global category director for sweet. The technology, together with the

The technology helps to educate users about the origins of citrus, its different varieties and sensory attributes, and current challenges facing the citrus market.

“Commercialising on-trend beverages with increasingly shorter time-to-market is a challenge that every manufacturer must face.” – Dawn Streich, global product manager for citrus at Givaudan company’s co-creation software, enables ‘multiple iterations’ within as little as 30 minutes.

By the time that samples are sent and potential modifications are made, the conventional flavour creation process ‘can take months, or sometimes years’, he said.

However, Boettcher told this publication Givaudan’s process helps all parties to ‘speak the same language’ and ‘really shorten our time-to market’:

“The sample can be on its way before [the customer] goes home.”

Givaudan’s Virtual TasteTrek Citrus tool is part of its Flavours TasteTrek program, which o!ers customers the opportunity to learn about citrus varieties in groves around the world. Aside from visiting UCR’s collection (both physically and now virtually), the programme also covers citrus-growing regions in Brazil and Italy.

Givaudan firrst started collaborating with UCR in 2006, when the flavours and fragrances supplier instigated the TasteTrek programme in California. Last year, Givaudan gifted $3.5m (€3.2m) to UCR’s collection – which for the next 10 years will be known as the Givaudan Citrus Variety Collection.

The funding aims to help UCR protect the collection against the impending threat of Citrus Greening Disease, otherwise known as Huanglongbing (HLB). More specifically, the donation will pay for a 2.8-acre protective screened structure for new trees and back-up trees at the site.

Citrus Greening Disease (HLB) has been detected in nearly all major citrus growing regions, including in Florida, Brazil, and Mexico.

Caused by a bacterium that is transmitted by the Asian Citrus Psyllid, HLB a!ects the way in which nutrients are transferred from root to tree.

Once infected, the tree yield declines, and fruit appearance and flavour are affected. As there currently no cure, the disease ultimately ends up killing the tree.

What is Citrus Greening Disease?

The screen is under construction and due to be completed within the next three months. The endowment will help protect biodiversity and the ‘bank of knowledge of citrus’ that Pellegrinelli said ‘we cannot a!ord to lose’.

Givaudan’s virtual reality tool educates customers about Citrus Greening Disease, which the company’s EAME product manager suggested is key for anyone working with citrus today. “It offers the opportunity to share knowledge on the citrus industry and on the issues the citrus industry is facing at this time. I think it’s important to let everyone know what is happening.”