The Ark Encounter, a creationist theme park in Kentucky, has launched a new virtual reality experience, Truth Traveler, with its first show ‘A Flood of Reality’. 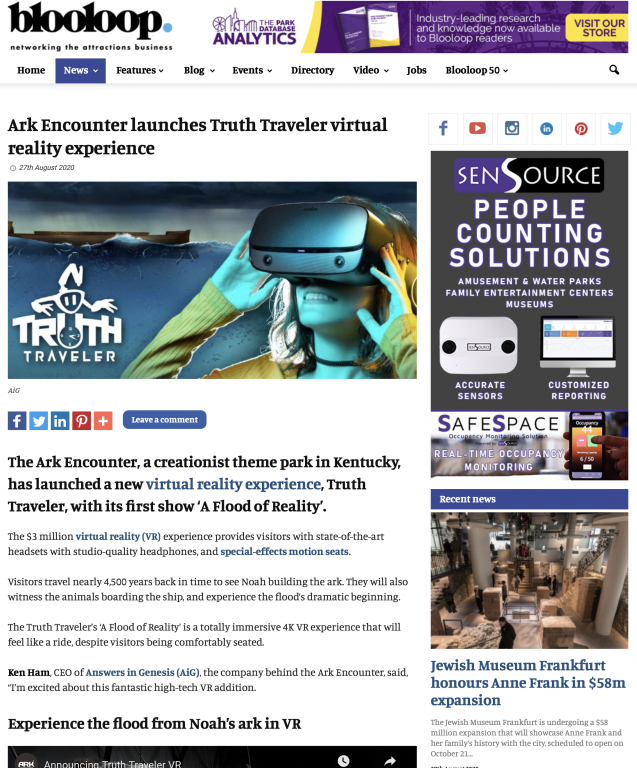 Visitors travel nearly 4,500 years back in time to see Noah building the ark. They will also witness the animals boarding the ship, and experience the flood’s dramatic beginning.

The Truth Traveler’s ‘A Flood of Reality’ is a totally immersive 4K VR experience that will feel like a ride, despite visitors being comfortably seated.

Ken Ham, CEO of Answers in Genesis (AiG), the company behind the Ark Encounter, said, “I’m excited about this fantastic high-tech VR addition.

Experience the flood from Noah’s ark in VR

“As people have come to expect at the Ark Encounter, the bar of excellence is set extremely high, as it is again with this experience.”

Ham, who appears as a hologram during the experience, added: “This 4K VR experience is like no other. While its quality of production and immersive feel are what you would expect from Walt Disney World or Universal Studios, the message is different.

“A Flood of Reality presents Noah’s ark and the flood as factual history and reinforces the truth of the Bible.”

The attraction offers audio narration from a robot called P.O.D, and its seats move while blasting visitors with air and scents.

The animals went in two by two, hurrah! “Since we reopened our attractions on June 8, I have been greatly encouraged to see so many families, including children, visiting us once again,” said Ham.

“Having been shut down for nearly three months, and with all that’s happened across the nation, we weren’t sure what to expect for the first several weeks.

“But we have been pleasantly surprised by the strong attendance, as have local hotels, B&Bs, and restaurants,” he added.

The Ark Encounter, which opened in 2016, features an enormous replica of Noah’s ark. AiG also operates the Creation Museum in Kentucky.

The VR motion ride was developed by Groove Jones.