The year that virtual reality took over Comic-Con 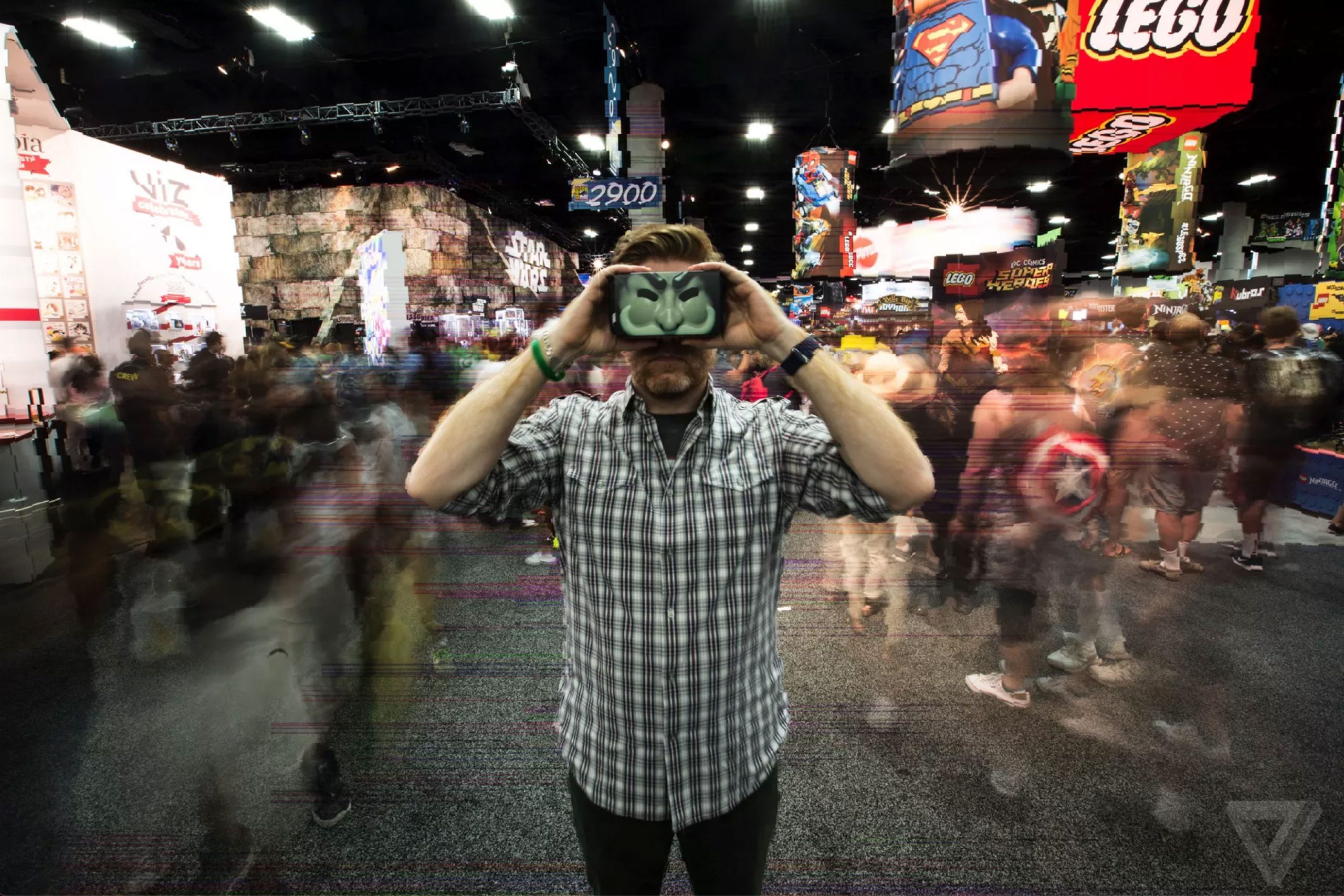 This past Wednesday, I visited Coney Island with a drug-addled hacker as he mind-tripped through a neon dance party. Thursday I became Harley Quinn, working my way through an elaborate fight sequence with the rest of the Suicide Squad. Friday I was strapped to a gurney, wheeled down the hallways of an insane asylum, and then burned at the stake. Saturday I tried fought off an evil spirit with the help of two friends — one of which I’m pretty sure was a lycanthrope.

360-degree videos and VR have been slowly nosing their way into San Diego’s mecca of pop and geek culture, but in 2016 they took over the show entirely. Nearly every network and studio seemed to be touting some kind of VR-related experience. From The Man in the High Castle and Suicide Squad, to X-Men: Apocalypse and Rick and Morty, you couldn’t walk a block without seeing a sign for some kind of VR experience.

“WE REALLY JUST WANT TO REWARD THE FANS THAT WE HAVE.”

“We really just want to reward the fans that we have,” Kenya Hardaway, FX Networks’ vice president of integrated promotions, told me outside the network’s massive installation for American Horror Story. An HTC Vive horror experience that served around 2,500 fans a day, AHS Fearless VR served up a series of themed mini-scenes focusing on common phobias: claustrophobia, acrophobia, of gettingburnedalive-o-phobia. (Yes, it was sufficiently upsetting — in the exact kind of roller-coaster way you’d expect from AHS). 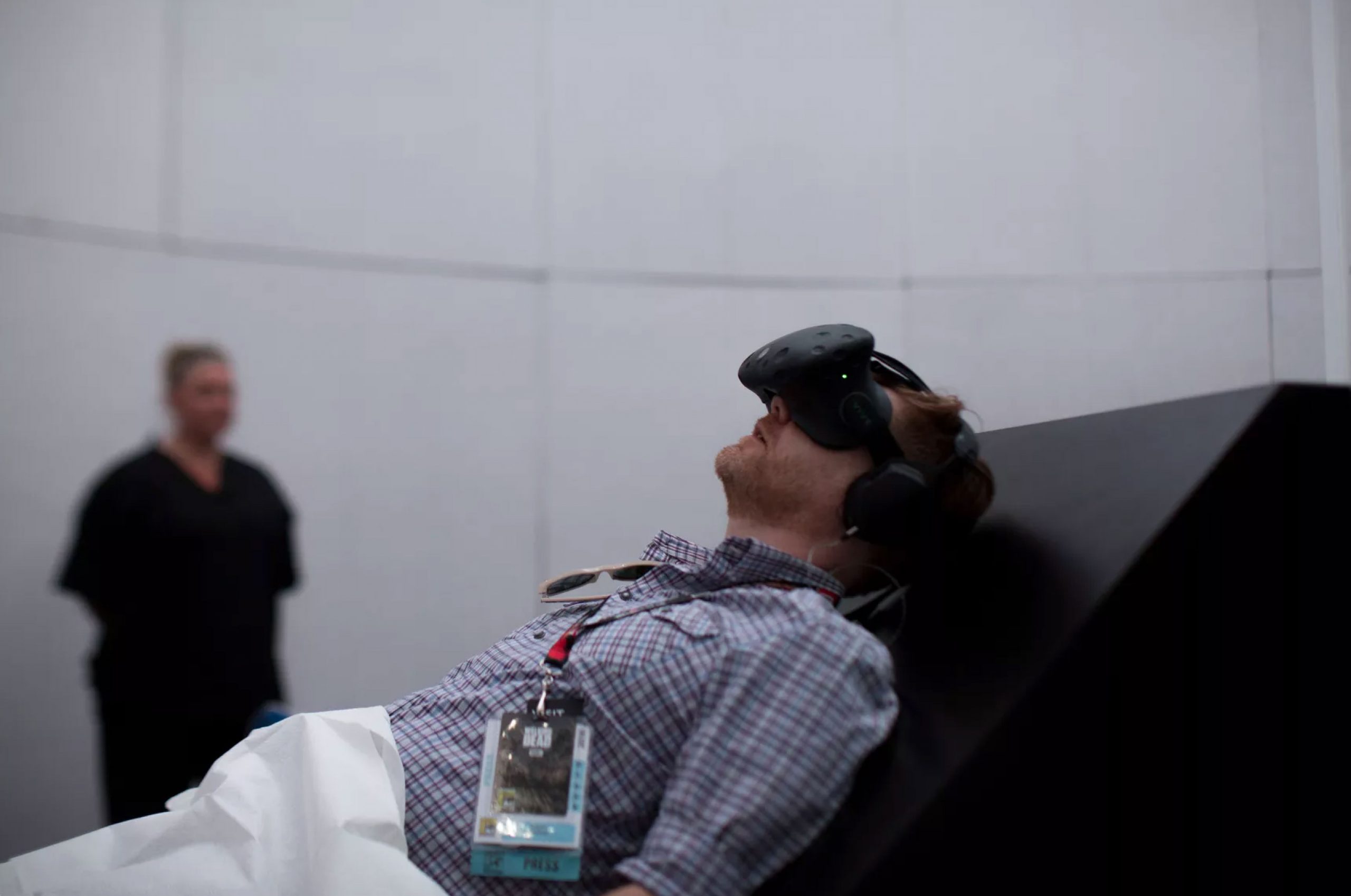 Participants had a sheet placed over them… like cadavers.

If appealing to existing fans of various properties was the goal, Comic-Con’s experiences certainly seemed to be succeeding. At the X-Men: Apocalypse installation — an escape room that put a VR headset in play to solve a vital clue — participant Cynthia Medina said the draw was simple. “I just like the X-Men movies.” Several blocks away at the Mr. Robot pop-up shop, Kathleen O’Toole was holding a place in line for her daughter, hours before the installation was even set to open. “We’re both really big fans,” she said. “It’s such an intense, different kind of show.”

What stood out was that despite the lines, attendees largely didn’t care about virtual reality, augmented reality, or any other ballyhooed technology that was being utilized. They simply wanted to take a further step into their favorite fictional worlds — to the point where most at the Mr. Robot site called out the activation’s recreation of several sets as the draw, not the VR experience. “I just wanted to see how well they replicated the set, and get a real experience of how it would feel in Mr. Robot’s office,” said 48-year-old Ben Kam. Down the line, O’Toole agreed. “We did the virtual reality Conan thing. So I’ve done virtual reality before,” she said.

“I JUST WANTED TO SEE HOW WELL THEY REPLICATED THE SET.”

It begs the question: if virtual reality wasn’t serving as a magical value-add to entice convention attendees, what did it offer? “There’s a lot of huge fans of the show out here, and obviously for a fan the best types of activations are the immersive ones,” FX’s Hardaway said, but the addition of VR didn’t automatically translate into fans immediately wanting to revisit shows or movies. At the AHS installation, 26-year-old William Sherman — who actually wasn’t a fan — did say he was more inclined to check out the new season after the experience, but most at the convention dismissed the idea outright.

“I’m going to watch the show anyway because I love it,” O’Toole said, calling the Mr. Robot installation just “one more thing to do at Comic-Con.” Outside the X-Men exhibit, fan Isaac Garcia was even more direct when asked if the installation would make him see the film again. “No, it was just an escape room,” he said. “I liked the theme, though.” 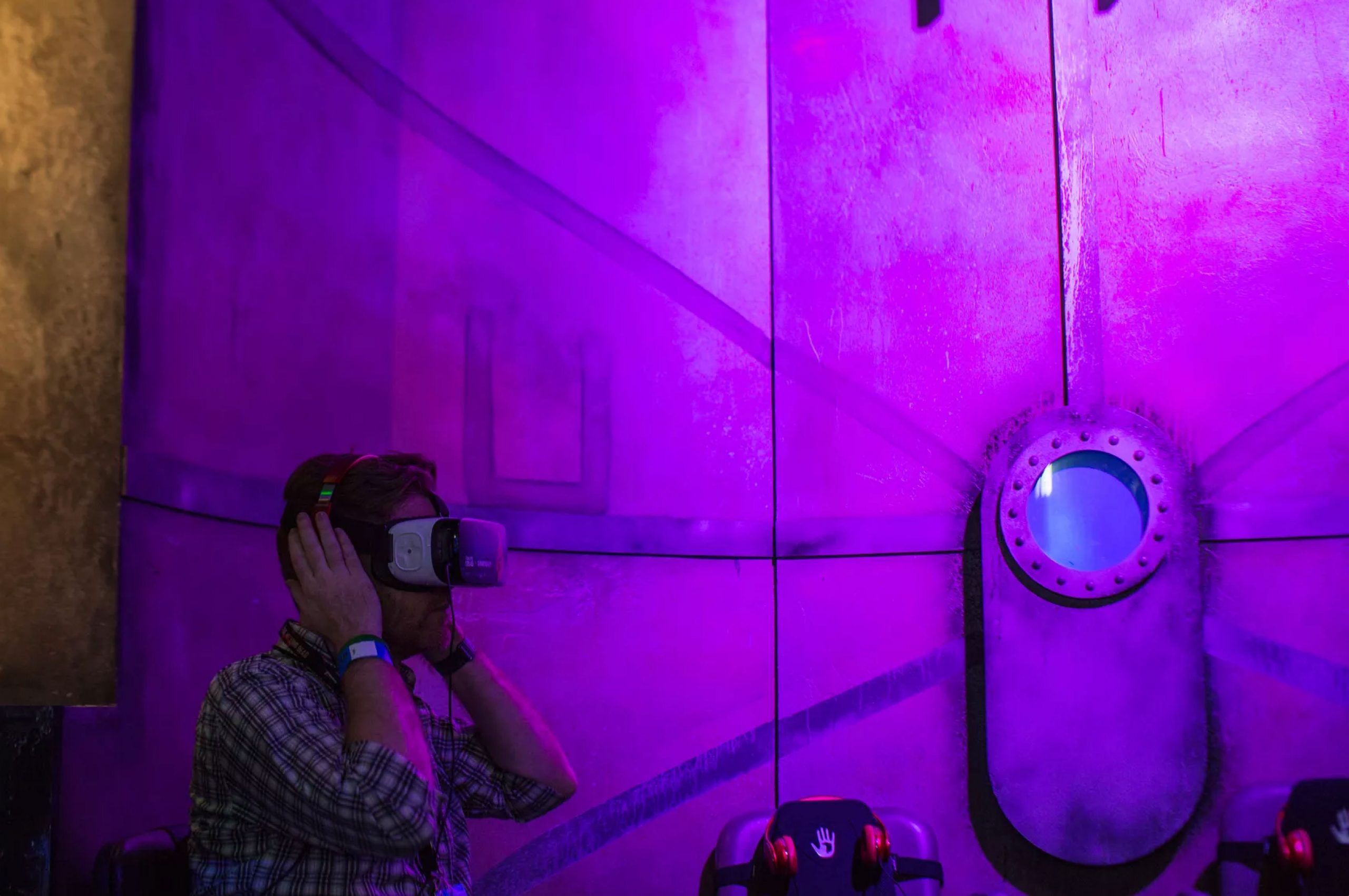 The idea of a studio or network spending money on an installation experience simply to show fans a good time — even though it doesn’t directly create new fans, or turn current ones into repeat viewers — is a terribly romantic idea. It seems even more so at a place like Comic-Con, where such a premium is put on fan service. It’s also not very realistic, and you only need to look at the larger convention itself to grasp the underlying dynamic.

Studios like Warner Bros. and Marvel don’t bring the casts of their upcoming films to the cavernous Hall H just to throw a geek party. For these corporate behemoths, Comic-Con is all about promotion, with the idea that every piece of news or footage shown will soon ricochet around the world — aided by social media and news outlets — until it starts a furor of fandom that (hopefully) crescendos in a massive opening weekend at the box office. Suicide Squad didn’t partner with Samsung, build out a massive installation, and open a fake tattoo bar at Comic-Con just to be awesome; those things were all done to help sell a movie. It may be fun, and there may be swag, but marketing is marketing all the same.

The irony is that the better the experience is, the more attention it will get, so there is incentive to create works that are actually interesting unto themselves. Filmmaker Kevin Cornish, who directed the Teen Wolf VR experience for MTV, explained that on his project, corporate sponsor AT&T was extremely pleased because the experience went beyond static, 360-degree video captures — low-hanging swipes at VR that are already starting to feel old thanks to the proliferation of 360-degree video on Facebook.

Did I have a great time checking out the various VR experiences at Comic-Con? Absolutely. Some were fun, some were just fine, and some seemed to be real steps forward that actively brought new depth to the show they were selling. (Others were less than impressive, but maybe I just expect a little more than a 360-degree fight scene with Will Smith in 2016.) But for all their successes and failures, they were simply commercials: artistic works in their own right, for certain, but inevitably aimed at helping promote some other work.

In the end, the state of VR at Comic-Con is a lot like the state of Comic-Con itself. Noble at times, catering to the pure of heart, but always looking to use the faithful to springboard into ever-higher orbits of hype. “We like to see people have a good time; that’s a big part of it,” FX’s Kenya Hardaway told me — but they also love to see the media. “We’ve generated a lot of press through this VR, and people are now starting to think about season six [of American Horror Story], and what that could be as a result of what we’re doing here. That’s going far and wide, far beyond the convention itself. So for us, generating that earned media — getting it out there in the press and making it part of the conversation again — is a huge win.”