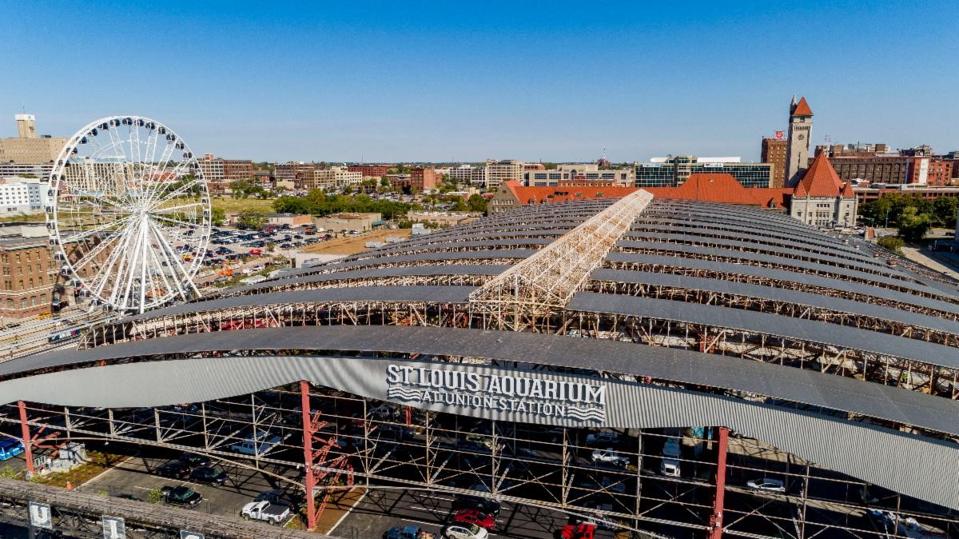 The St. Louis Aquarium at Union Station opened right before 2020.

The latest attraction in St. Louis promises quite an aquatic adventure.

Located in Union Station, the St. Louis Aquarium at Union Station opened on Christmas Day 2019 with over 13,000 creatures in its exhibits and six galleries highlighting everything from local river ecosystems to the dark depths of the ocean.

While starting off 2020 on an inaugural note, the idea for having an aquarium in St. Louis has been floating around since the historic Union Station was purchased by Lodging Hospitality Management, a firm also based in St. Louis, in 2012.

“When they surveyed what was missing in the region, LHM heard a resounding cry from the residents of St. Louis for an aquarium,” explained Tami Brown, the aquarium’s executive director. “They visited other aquariums around the country to look at best practices and engaged PGAV Destinations to design the aquarium and McCarthy Building Companies to construct it.”

The St. Louis Aquarium’s design also incorporates the station’s history and architecture through a simulated train ride narrated by actor and St. Louis native John Goodman. Upon entering, guests will first encounter the aquarium’s Grand Lobby, where a 4K curved screen arches over their heads and displays a virtual ocean.

“When guests arrive, they board one of two replica passenger rail cars to take a virtual train ride into the aquarium,” said Brown. “Elements of the 1894 train terminal such as steel beams and concrete footings and arched entryways can be seen throughout.”

The three-minute train ride begins in 1894 St. Louis when Union Station first opened. It continues forward in time to the 1904 World’s Fair and Olympic Games in St. Louis and takes riders through the years of the Gateway Arch construction and back into the present day.

Then, the course sets off in a completely different direction. The train flies over and then plunges into the Mississippi River to show guests the fish below its mighty waters. It then zooms to the Gulf of Mexico to visit with Humpback Whales before returning safely to the aquarium.

Aside from the train ride, the aquarium’s galleries are distinct in their own right. As are their inhabitants. “The aquarium’s animals are from all parts of the globe,” noted Brown.

In the “Confluence Gallery,” which the train passengers first encounter when they exit the ride, visitors can see fish that reside in America’s great rivers that link to the St. Louis region.

The “Global Rivers” gallery displays fish from the Amazon, with copper-flecked Piranhas having their own habitat. “Shark Canyon” offers a variety of views of its in-residence sharks and rays plus a variety of other fish including Goliath Grouper.

“The Deep” exhibit is home to animals that live in the ocean’s depths, including Leafy Sea Dragons, jellyfish and the Giant Pacific Octopus. There’s also a coral reef where children can look for clownfish and other species made famous by cartoons.

The aquarium is home to some standout creatures. A trio of sibling North American River Otters named Thatcher, Sawyer and Finn — after Mark Twain’s literary characters —reside in their own two-story environment, with a pool, waterfall, dig out and sleeping den. An animated Otter Chat allows guests to talk with “Tommy the Otter” and learn more about otters overall.

Then there’s Lord Stanley, a rare blue lobster that was donated by a seafood restaurant in Cape Cod, that was given this moniker in honor of the St. Louis Blues NHL Stanley Cup victory.

Visitors to the aquarium will also have the chance to interact with certain creatures via technology or touch. Each exhibit has a touch screen next to it where they can get a 360-degree view of the animals and learn more about them. Direct encounters will range from having Doctor Fish nibble on the skin of heir hands’ skin to being able to put a gentle hand on invertebrates such as sea stars and crabs.

“We joke that if people try to leave the aquarium with dry hands, we will send them back in to do it right,” said Brown.