The Perot Museum of Nature and Science is talking about evolution, and that’s actually unusual 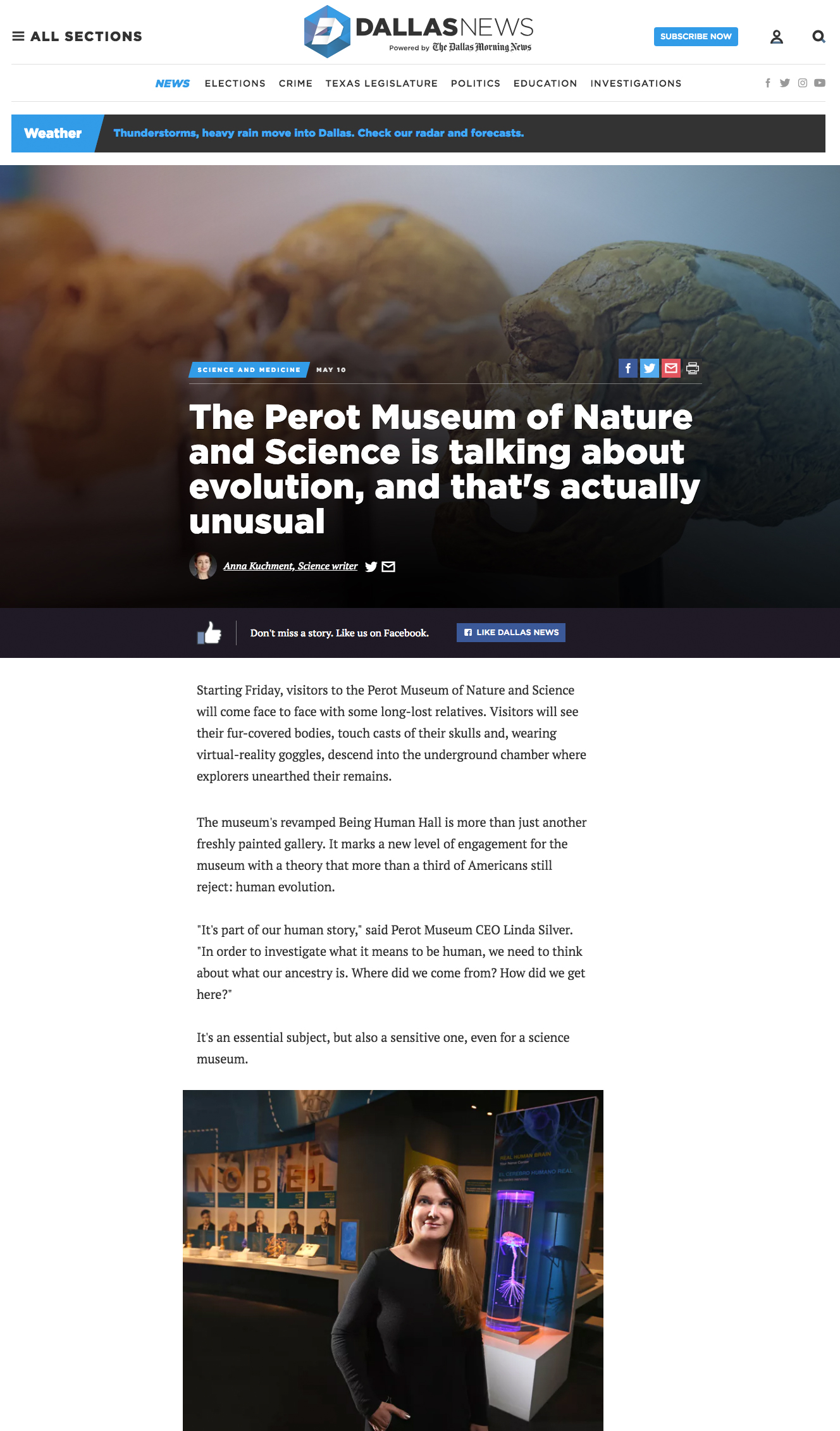 Starting Friday, visitors to the Perot Museum of Nature and Science will come face to face with some long-lost relatives. Visitors will see their fur-covered bodies, touch casts of their skulls and, wearing virtual-reality goggles, descend into the underground chamber where explorers unearthed their remains.

The museum’s revamped Being Human Hall is more than just another freshly painted gallery. It marks a new level of engagement for the museum with a theory that more than a third of Americans still reject: human evolution.

“It’s part of our human story,” said Perot Museum CEO Linda Silver. “In order to investigate what it means to be human, we need to think about what our ancestry is. Where did we come from? How did we get here?”

It’s an essential subject, but also a sensitive one, even for a science museum.

“It’s part of our human story,” said Perot Museum CEO Linda Silver. “In order to investigate what it means to be human, we need to think about what our ancestry is. Where did we come from? How did we get here?”

Only a minority of science museums present the subject in depth, said Todd Happer, a spokesperson for the Association of Science-Technology Centers, an umbrella group for science museums.

The subject also gets short shrift in classrooms. A 2010 survey of science teachers reported in the journal Science found that more than 60 percent of high school biology teachers either skip or skimp on teaching it, either to avoid conflict or because they lack knowledge about the subject.

And while scientists trace the beginnings of life on earth back 3.8 billion years, and say that modern humans evolved about 200,000 years ago, a 2017 Gallup poll  found that 38 percent of Americans believe that God created humans in their present form within the past 10,000 years. Only 19 percent believe God played no role in the process.

Silver’s own doctoral studies confirmed the challenges in addressing the subject. “The levels of misconception about evolution are the same globally,” she said. “But the level of acceptance of evolution is higher outside the United States.”

John Mead, who teaches biology to middle-school students at the St. Mark’s School of Texas, said the new center would fill an important niche. “There’s really nobody else in the central and southern United States that is making that a front-and-center effort,” said Mead, who also serves as a science adviser to the museum.

When the museum first opened, it was accused of soft-pedaling controversial issues, including climate change. But it has now stepped confidently into both areas. A display in its climate hall shows how temperatures and carbon dioxide levels in the atmosphere have climbed since 1970 and states that human activity has sped those changes.

“We’re a science center and we present science, period,” said Silver, who dedicated her doctoral dissertation at the University of Southern California to the study of how science museum visitors think about evolution. “That’s what our responsibility is as a museum.”

Displays in the Being Human Hall  at the Perot Museum in Dallas.

The new Being Human Hall features models of Lucy and Lucien, human ancestors who lived 3 million years ago, and traces how humans have evolved since our family group split off from our last common ancestor with living apes more than 6 million years ago.

It also highlights the newest understanding of evolution, which is that it has not proceeded in a straight line, with one species at a time evolving neatly into the next ancient ancestor species. Instead, some human relatives and ancestors lived at the same time. It’s a process the museum’s display text likens to “a tangled bush.” Eventually, all the species died out except for humans.

The new Being Human Hall features models of Lucy and Lucien, human ancestors who lived 3 million years ago, and traces how humans have evolved since our family group split off from chimpanzees more than 6 million years ago.

The hall is part of the museum’s move to establish itself as a hub of information about human origins. It has partnered with one of the most famous scientists and explorers working today, Lee Berger, the South Africa-based paleoanthropologist who found one of the biggest troves of fossils related to humans ever discovered. Dallas-based philanthropist Lyda Hill, who supports Berger’s work and is also a founding donor of the Perot Museum, brought them together. Since then, Berger has spoken several times at the museum and brought 3D prints of his fossil finds to show Dallas-area school children.

Berger serves as distinguished science advisor to the newly formed Center for the Exploration of the Human Journey, which will disseminate his findings and develop curricula and lesson plans for teachers based around human origins and human biology.

“We are striving to be a lab for innovative science communication,” said Becca Peixotto, director of the new center and a colleague of Berger’s. She was one of six “underground astronauts” who ventured 100 feet below ground into a cave to retrieve a new species of human relative that Berger discovered in 2013. It is called Homo naledi.  She filmed video of the cave in February that now forms the basis of a virtual reality experience presented in the new hall.

“We are striving to be a lab for innovative science communication,” said Becca Peixotto, director of the new center.

The new center will translate the findings from Berger and his team of more than 160 scientists around the world into timely exhibitions, presentations and school lesson plans. Berger himself has been a communications innovator, as he and his colleagues have live-Tweeted their expeditions and Skype-called classrooms. He also wrote a children’s book, The Skull in the Rock, about evolution and how his discoveries fit within the story of human origins.

Fosite Ndahayo, a fourth-grader at Uplift Luna Preparatory school, visited the hall during a press preview Thursday. For him, the main attraction lay in understanding the human body. The Being Human Hall features interactive displays about the things that make humans unique, such as our brain, our hands, our DNA our voice and how we move. UT Southwestern Medical Center donated a human brain and spinal cord that is on display in a case of diluted formaldehyde.

UT Southwestern Medical Center donated a human brain that is on display in a case of diluted formaldehyde.

“I was really excited to come here because I wanted to figure out a lot about the human body,” said Ndahayo, 10.

Wearing a small white lab coat and goggles given out by the museum, he watched a video about the commonalities and differences between chimpanzees and Lucy. Then he peeked at a case that displayed the full-sized Lucy and Lucien models.

He said that, as a Christian, he believed that God created humans. “If we were like that a long time ago who would have created them?” he wondered aloud. “Science might have created everything, but nobody knows who created science or who created the Big Bang theory. None of us would be here without that.”

After watching the two figures some more he added, “Sometimes, I want to see how our brain works and how we move and where we came from. I figured out today that we came from them.”