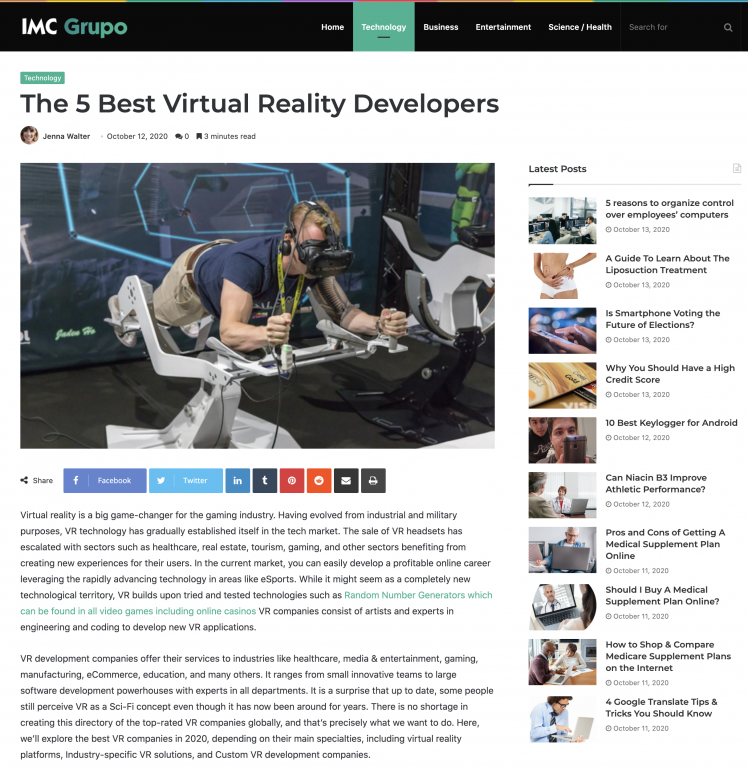 Virtual reality is a big game-changer for the gaming industry. Having evolved from industrial and military purposes, VR technology has gradually established itself in the tech market. The sale of VR headsets has escalated with sectors such as healthcare, real estate, tourism, gaming, and other sectors benefiting from creating new experiences for their users. In the current market, you can easily develop a profitable online career leveraging the rapidly advancing technology in areas like eSports. While it might seem as a completely new technological territory, VR builds upon tried and tested technologies such as Random Number Generators which can be found in all video games including online casinos VR companies consist of artists and experts in engineering and coding to develop new VR applications.

VR development companies offer their services to industries like healthcare, media & entertainment, gaming, manufacturing, eCommerce, education, and many others. It ranges from small innovative teams to large software development powerhouses with experts in all departments. It is a surprise that up to date, some people still perceive VR as a Sci-Fi concept even though it has now been around for years. There is no shortage in creating this directory of the top-rated VR companies globally, and that’s precisely what we want to do. Here, we’ll explore the best VR companies in 2020, depending on their main specialties, including virtual reality platforms, Industry-specific VR solutions, and Custom VR development companies.

Groove Jones is known for its determination to transform the client’s ideas into modern and dynamic solutions. The VR development company, based in Dallas, was founded in 2015 with a mission to create next-generation experiences and give brands a competitive edge in the ever-changing business world. Groove Jones is credited for developing a complete VR experience that guarantees to entertain users from start to the end. It has even come up with its platform known as GrooveTech to campaign and launch activations of any complexity level. Good communication and timeliness are some of the characteristics that saw the company earn over 65,000 views on YouTube, according to previous customers.

NEXT/NOW, founded in 2011, is an innovative technology agency company based in Chicago that mainly focuses on creating great VR experiences for leading companies in various industries. Their products’ custom solution feature allows the proud team of around 20 to create unique content for their clients. Also, they provide VR & 360 video as well as Augmented Reality (AR) for devices such as Oculus Rift and HTC Vive. The brand’s uniqueness is evidenced by the works of the 3D artists and professional graphic designers who create breathtaking pictures that are realistic and generate the thrill that consumers need.

4Experience is a Polish AR/VR development company that was founded in 2015. The company mostly serves small and midmarket clients in industries like real estate, gaming, and education. The organization’s notable project involved creating a VR work simulator, which provided employees with a step-by-step guide on specifics of equipment usage and the working process. The team at 4Expreience is known for its devotion to helping users from the consultation stage to the final stage of VR implementation. In essence, the team company’s goal is to offer your company a VR experience that will set you apart from the competition.

Program-Ace is a Ukrainian-based VR development company that has a positive reputation for achieving more than 800 successful innovative projects. The company was founded in 1992 to focus on website development, mobile app development, and AR/VR development to small and mid-market clients in the IT, gaming, and education sectors. The team of approximately 120 experts is well-trained and skilled to provide MR, AR, or VR development services of any complexity to differentiate you from the competition. In other words, VR allows a brand to represent its product or service using a powerful message via interaction.

Panedia is made up of a team of about five passionate developers and photographers. Based in Sydney, Australia, these individuals are experts on viral content production. They have dedicated their careers to video production, IT strategy consultation, and custom software development for clients across various industries, including healthcare, hospitality, and education. In its multiple platforms such as Oculus Rift and Samsung Gear VR, Panedia offers playback services on devices such as smartphones, tablets, google maps, and computers for convenience. The company’s achievements do not end there. Panedia is credited with developing a 360-degree virtual reality simulation that assisted pilots in circumnavigating even through high-risk environments. The success of the project marked its expansion to the entire airport.

Based on your specifications, budget, and timeline, many VR companies can match your project needs. All you need to do is reach out to one of them to find out if they can match your expectations.